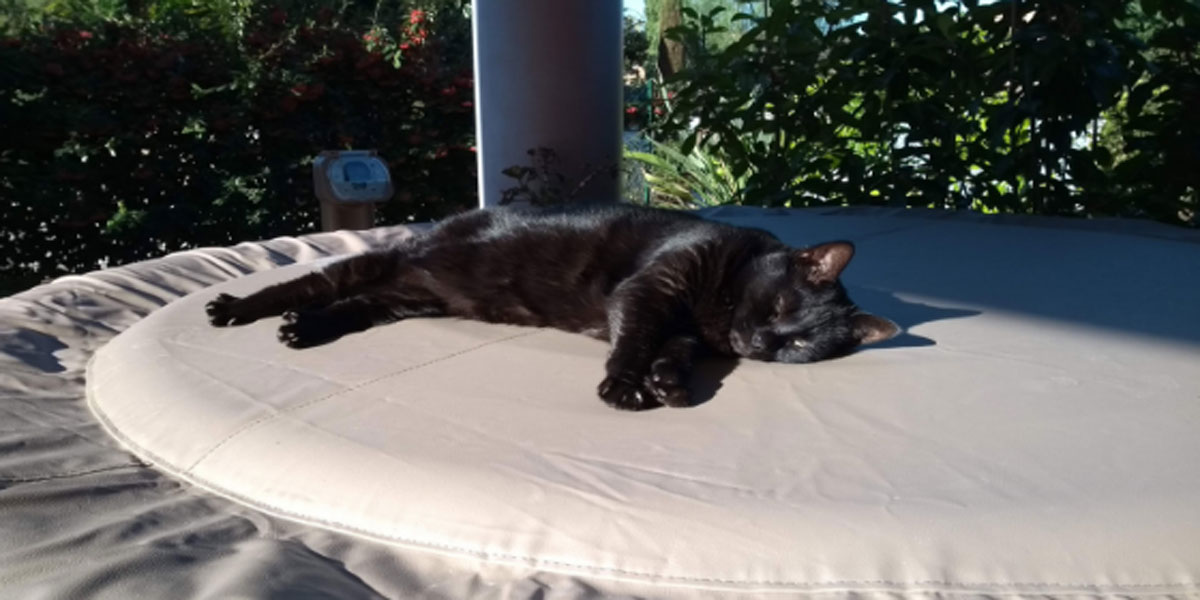 It has been a while since the Little Furry Muse has deigned to share her wisdom with us, but, it being the new year, she has decided we could do with it. After all, if we’re going to be making resolutions, they should be about her, right?

It has come to my attention that the start of a new year is a time of great stress for humans, and a time at which you resolve to make yourselves better. I approve of this, as I believe that means you will be making yourselves into better cat slaves. However, the Significant Human (SH) has been muttering about things like getting up earlier and eating less sugar. These are not resolutions I approve of, as I see no way in which they will improve my life. She already gets up when I require her to, so what’s the point in getting up earlier? Plus, this Christmas I discovered fudge when the humans were eating it on the sofa, and if she’s intending to give that up then she’ll have to ensure a steady supply remains in effect for me. (Human’s note: no, the Little Furry Muse is not allowed fudge. However, it turns out that she’s a feline fudge-crumb-detector, and also a brazen thief of all things fudge based if you let your guard down for even an instant …)

Human! This is not acceptable! I am in charge here!

1. Sleep with pleasure, dedication, and commitment.
I have noticed that the SH sleeps very poorly. Not only does she not take advantage of the daylight hours for sleeping in a puddle of warm sun, but she does not preface her sleeping by sprinting wildly from room to room. She seems to underestimate the importance of sleep as a way to relax, recharge, and equip oneself to face the world with one’s best paw and sharpest teeth forward. Plus, just when I want to sleep on her, she moves. If she’d just sleep more it would solve all these problems.

2. Keep your coat glossy and your claws sharp.
I dedicate a large proportion of my non-sleeping time to ensuring my coat is groomed to the exacting standard of every self-respecting cat, and use the living room rug to keep my claws well-honed. After all, one never knows when a curtain may need shredding or a gecko catching, and one must look fabulous while doing it. If the human would only devote a similar amount of time to self-care, I wouldn’t need to bring her mice and lizards.

3. Eat well and often.
I fear the human, who spends far too much time frowning at her thighs (which are perfectly adequate as a bed for me, so I’m not sure what more she wants), does not understand that food is one of life’s great joys. She doles my packets out in miserable little measures, and uses the dread biscuit dispenser to control night-time feeds. She also refuses me treats other than on exceptional occasions, because I am, according to the evil veterinarian, “round”. He’s no cheetah himself. But apparently being round is undesirable for cats and humans, which I object to on moral and appetite-based grounds. I am healthy and adorable, and I do not need to adhere to the beauty standards of a bespectacled man in a white coat, or anyone else for that matter. And I fully intend to bite him again next time I see him, to ensure he appreciates the level of my disapproval.

4. Be still.
The SH is not very good at stillness. It’s all tappity-tap at her internet machine, or running around removing my hair from the house for a reason I have yet to understand. The monstrous machine she drags around gobbles it all up, but doesn’t seen to do anything useful with it. It bears further investigation.  But back to the issue of stillness. Often the SH will go outside and stand on the deck looking at the garden with every evidence of enjoyment. I will walk out to offer her the comfort of my presence, and she will give my ears a quick scritch then vanish back to her internet machine again, often with a reluctant sigh. She fails to appreciate that true Zen is achieved only through taking the time to be a little still, a little quiet, and doing nothing but watch the slow movement of life around oneself, feeling the way the sun warms one’s fur and listening to the small and large noises of the day. And, of course, either sitting in the correct position to offer me a seat of utmost comfort, or scritching my ears until I bite her for not stopping two seconds earlier. Both, preferably.

5. Appreciate the little things.
Now this is something the SH is improving at. Most years, she buys me these ridiculous fake birds and strange-looking mice, which I may pat around a little to make her happy, but soon place under the sofa in the Graveyard of Unwanted Things. I mean, I have a garden outside. I can get my own birds. This year, however, she gave me a pompom that she cut off her Christmas jumper, and let me steal three hair ties off the coffee table, after which I played with her and the Other Human. It’s very entertaining – one simply jumps at the pompom and bats it somewhere awkward, then laughs at the humans trying to fetch it back. I think they’d keep at it for hours if I didn’t call an end to the game and walk away. But it seems to bring them much joy, and I admit it gives me pleasure to see them running about. And one does not need to buy fake mice. One only needs a hair tie, a little time, and a little imagination, all of which is much more affordable and much more fun.

Stop with the photos, human. Just bask the glory of my presence.

So there we are, humans. Five things that I have been attempting to impress on my humans, and which I hope you take to heart in the year to come. After all, what use are resolutions that don’t make life better for one’s feline ruler?

It appears I have work to do. And a lot of it.

You might remember that I’m not a fan of New Year’s Resolutions myself, but that Layla does dispense rather useful advice at times. And if you’d like to know more about the Little Furry Muse, she even did a Q&A, and has been known to offer other cats advice on training their humans…

How about you, lovely people? Do you make New Year’s Resolutions? Let me know why or why not below!