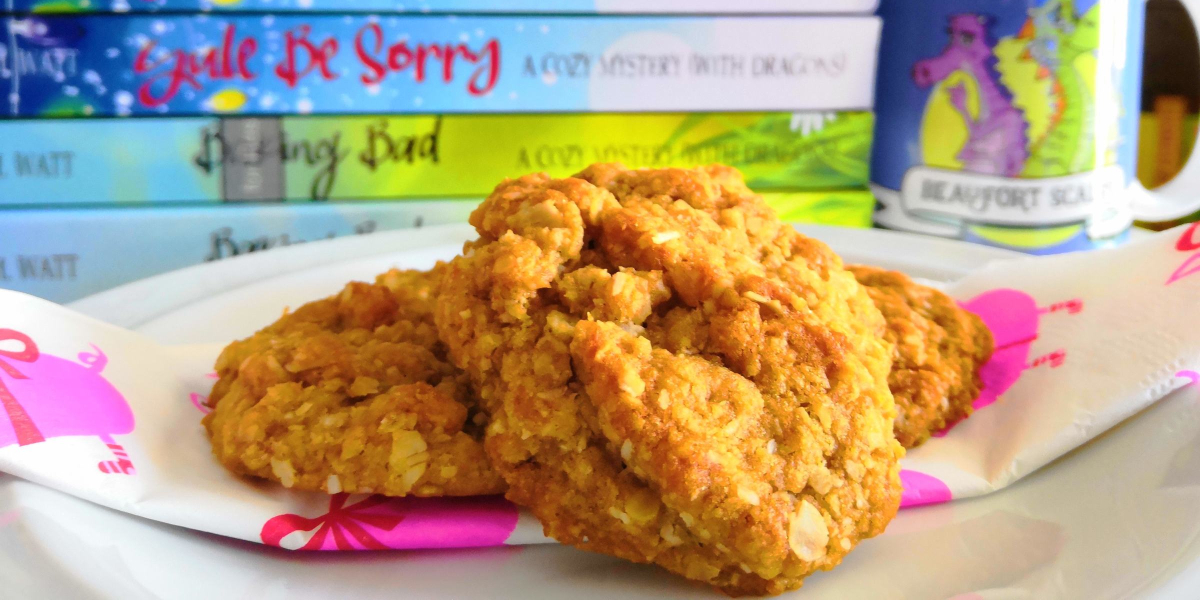 I’m quite embarrassed to admit that I’ve never actually made Anzac biscuits before. They were ubiquitous when I was growing up – every market stall and bakery had them, and the taste of them is as wonderfully familiar as my go-to quick cookie recipe for porridge cakes (which I have yet to put on this blog because I fear they would not meet the exacting standards of the Toot Hansell Women’s Institute. Although, I rather think Mortimer would enjoy them, so I’ll do that at some point), which taste much, much better than they sound.

However, in the third Beaufort Scales cozy mystery, the dragons and the Women’s Institute are away from home for a few days, staying in a manor house for a spa weekend. This means that, in order to satisfy dragon appetites (and not arouse the suspicions of the manor house staff), the ladies of the W.I. needed to pack plenty of cakes and biscuits that would travel well. And Anzac biscuits, first baked by New Zealand and Australian wives and women’s groups to ship to soldiers abroad, as the biscuits kept well during naval transportation, fit that bill admirably.

Obviously many things can go wrong when dragons are involved in a spa weekend (never mind the Women’s Institute themselves), but the standard of biscuits and cakes would never drop. Except for Jasmine’s, but then her standards were rather variable anyway, and it seems Anzac biscuits may just be her sort of biscuit. Certainly the dragons think so, but then, they’re never that fussy…

Lovely people, what food or recipe (it doesn’t have to be sweet!) brings back childhood for you? Let me know below!

Pre-heat oven to 180C/350F/mysterious temperature known only to my oven, that varies based on the day. I should buy an oven thermometer, really. Line two baking trays with waxed paper.

Melt butter in saucepan over low heat, then stir in golden syrup.

In small bowl, combine baking soda and 3 tablespoons of boiling water, then mix to dissolve while cackling enthusiastically at the frothing and reciting half-remembered lines from Macbeth. Add to saucepan and mix again, preferably while wearing a pointy hat and saying “my pretty” a lot.

Combine all other dry ingredients in a medium bowl and mix to combine (I find a whisk gets rid of sugar lumps nicely).

Make a well in the centre and add butter mix, vanilla and zest. Mix well.

Place in heaped tablespoons on baking trays, leaving a decent gap to allow for spreading (you should get about two dozen). Bake for around 10 minutes or until golden (or until the SO asks if something’s burning).

Cool and store for investigative supplies, or enjoy immediately with tea.

What foods would you pack for an investigative trip, lovely people? Let me know below!

If you haven’t read Beaufort’s first cozy mysteries yet, Baking Bad and Yule Be Sorry are both available in ebook and paperback from your favourite retailers – and head to the books page to discover the rest of the series!