A sequel to The Hard Sell, because I wanted to know what happened next … 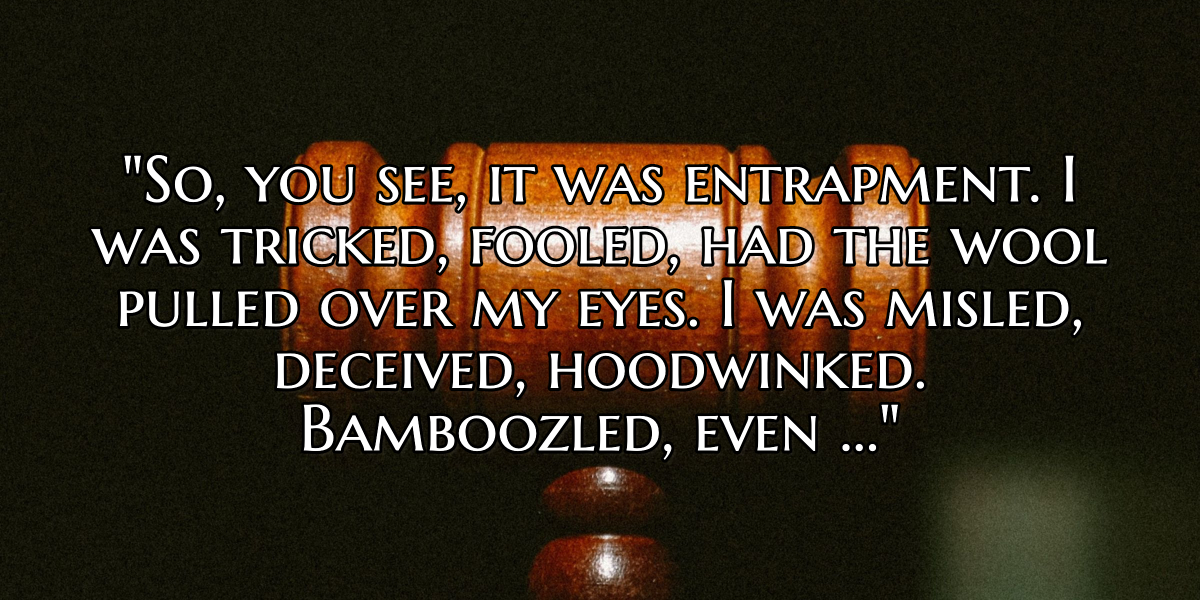 Characters have a way of sort of … growing on you. Even when you only intended to write one story about them, and had no idea that they had so much to say. Some of them can be very insistent that they’re not finished yet.

And Albert has a lot to say. It’s sort of a problem, actually. And while he may be a demon, he is weirdly endearing. Well, to me, anyway, which probably says something …

Anyhow, if you have not encountered a fast-talking salesdemon before, you may want to read his first story here before you start, so you’re not left wondering who exactly Albert is and why he has so many tentacles.

“So, you see, it was entrapment. I was tricked, fooled, had the wool pulled over my eyes. I was misled, deceived, hoodwinked. Bamboozled, even. A businessman carrying out business dealings on behalf of our fine firm, toeing the company line, touting the company values, stretching our reach, expanding our influence, broadening our hor—”

“Ma’am.” Albert took a deep breath – more for effect than anything else. Demons don’t need to breathe, but rather absorb what they need through the mucus-y coating on their skin. The thick yellow-tinged air of the deep earth was particularly invigorating, and he wished he’d taken his suit off so his tentacles could roam around freely. But appearances were appearances, and now he settled his hat more firmly on his head and straightened his tie. It was a new one, from some fancy tailor in Saville Row. Personally, he missed the cravat, but he was sure it would make its way around and back into fashion again. Things always did.

“You went to a sorcerer’s house, putting yourself fully in the path of danger. Your banishment led to the collapse of over seven hundred contracts, and we’re only lucky that the last council amendment was rejected, otherwise we’d be having to give up thousands of souls already acquired.”

“I really wouldn’t be boasting,” the judicial demon said. She had nine heavy breasts, each painted a different colour, and a pear-shaped body.

“Two more and I would have beaten Frank.”

“You got greedy,” the judicial demon said. “And careless.”

“In my defence, the sorcerer was drunk. All I could smell was vodka.”

“And you’ve never encountered a sneaky sorcerer before? You know they’ll use every trick they can think of to get to us.”

“Ah, but I almost got to her. She was tempted, she was considering. Her heart’s desire I offered her, the age-old trade, the traditional exchange, the precious, hallowed commerce, one small and promised soul in exchange for all she could wish for—”

“Albert. Your sales skills are not in question here. Please stop the grandstanding.”

Albert subsided. He wasn’t sure he even knew how not to grandstand, if that’s what you called it. He didn’t think it should be called that. It was merely a way of communicating, a method, a manner, a—

“Are you even listening?”

“Sorry. Yes.” He blinked the four of his eyes that were visible in a trustworthy manner, and the judicial demon sighed.

“Look, I appreciate that you have a good track record. You’ve closed some great deals, and really adapted to the whole digital era better than most. The crytpocurrency work you’ve been doing is a thing of beauty.”

“However, that doesn’t change the fact that we’ve now lost all those souls. Now, usual punishment would be dismemberment, impalement of the still-living pieces within sight of each other so that you’d constantly be trying to reassemble, and regular dousing in hydrogen peroxide for a couple of millennia.”

Albert shuddered. Everyone thought holy water was pure poison to demons, but it just made them damp. Hydrogen peroxide on dismembered body parts, however – the sight of the foaming alone could send you into madness after a few decades. Like the celebrated Frank, poor creature. Young demons still amused themselves by drinking fairy liquid and blowing bubbles out their ears at him.

“In light of the fact that you’ve never had a deal go bad, and that your conversion rates are excellent, I need to confer with myself. Go have a break and I’ll call you back when I’m ready.”

Albert doffed his hat and swept a low, exaggerated bow without a hint of mockery to it. “Please allow me to extend my sincere gratitude to you, your dishonour. It is truly the greatest of luck to have you judging me, as we all know that from you can only be expected the most balanced of sentences, the most carefully weighed of proclamations, the most considered and deeply reflected—”

“Get out!” each of the judge’s seven heads bellowed, and Albert bolted for the door.

There was a bar just outside the judiciary offices, and Albert found himself a seat in the corner, avoiding the many-eyed gazes of other penitent demons. Some had tattoos stamped on their slimy skin proclaiming such misdemeanours as petting puppies or not tripping small children when the opportunity offered itself. One hapless monster with dull pink eyes had “helped an old lady across the road” emblazoned between his eye stalks. Albert sympathised with him. But it really was such a young demon error, letting your worse nature get in the way of work.

“Ah, my good demon. Let me see – this is not a celebratory day, not at all, yet neither is it a day for wallowing in sadness and regret. There is yet hope, my friend. There is yet hope. So we shall drink to said hope, we shall raise a glass and let our fellowship of suffering believe, just for a moment, that everything will turn out just the way we wish, that deals will still be made, that souls will still be captured, that—”

“Vodka,” the bar demon said, slopping a pint glass down in front of Albert and sliding away again. “Bloody salesdemons.”

Albert stared at the glass, sticky sucker prints plastered all over the outside, then looked around the bar again. No one looked back – all eyes were on their own drinks and their own concerns. Someone was crying in the corner by the slop barrels, and the jukebox started up with a cacophony of wailing cats.

Albert loosened his tie, rolled up his sleeves, and drank.

The big hearing room was uncomfortably warm for a demon in a suit, but Albert kept his back straight and his eyes on the floor, feeling sweat dripping between his tentacles. It tickled.

The judiciary demon examined him severely. Two of her heads wore glasses, and one was smoking. “Albert, demon spawn of the third tier of inner Earth, you stand accused of careless behaviour, unsuited to a salesdemon, which brought you to the attention of a sorcerer. Your subsequent banishment by said sorcerer led to the loss of over seven hundred recruited souls. Please confirm your plea.”

Albert nodded gravely, removed his hat, and, holding it against his chest, said, “It is with a heavy heart and tortured spirit that I, Albert, admit to such terrible and crushing errors. My pride is injured, my ego fractured, and my shame is great. To have been brought so low by such a ploy! By such trickery, such deceit, such underhand dealings! I humbly submit that I was bested, that I was outwitted, the wool pulled over my eyes—”

“Albert! Guilty or not guilty, by all that is filthy! Then STOP TALKING!” The smoking head went into a paroxysm of coughing following the chorus of outbursts, and there was a pause as the judicial demon patted herself on the back and drank some water while her other six heads glared at the salesdemon.

Albert opened his mouth, closed it, opened it, then managed, “Guilty.”

“As I thought.” The demon glared at him for a moment longer, then added, “You are far too good a salesdemon to leave chopped up for a millenia. So I have devised a new punishment.”

Albert ventured a very small smile. “Training young demons, perhaps? Their oratory skills leave much to be desired. It physically hurts me to hear them speak at times.”

“Hmm. No. But that is an interesting proposition once you have served your initial term.”

The judiciary demon looked as if she was enjoying this a little too much. “No. You’d get far too much satisfaction from that.”

Albert thought she was wrong about that – only the baser demons could really derive pleasure from interrupting people’s dinners and forgetting their names. “But then, what? Multi-level marketing?”

“This is a punishment, Albert, not a demotion.” She held out a sheet of paper to him. “The details. You start in one hour. And you may as well get out of that suit and get comfortable. You won’t be doing any door-to-door for quite a while.”

He took the paper carefully, reading the heading with disbelieving eyes. “But —” he whispered.

“It’s better than dismemberment,” the judicial demon said, and rapped the floor neatly with a large wooden hammer held in one of her feet. “Next!”

Wow ur so butiful!

I no rite? Shes gorgus!

The educational standards on display here are so staggeringly low that it’s no wonder you are unable to grasp the fact that this young woman is either a)photoshopped or b)in possession of a large inheritance that has been spent on structurally unsound plastic surgery. As she is taking the photo in a particularly unattractive and poorly outfitted bathroom, I would venture to guess the former. You are all cretins, and I despair for the human race. You have no need of us to bring you low. You do it to yourselves.

Albert sighed, took a large mouthful of vodka, highlighted what he’d just written, and hit delete. He glanced longingly at the hat hung from a hook above his neatly made bed, then looked back at the screen. Dismemberment was looking pretty good. Just reading this drivel was causing his brain cells to shrivel, and the vat of vodka he was getting through each day was nowhere near enough to scrub his mind of all the pouting lips, flexing muscles, and text speak he was wading through. Yes, all that posing was harmless. But it was also so pointless. And so was what he was doing. Pointless, at any rate. Harmless … eh. Not harmful enough, in his mind.

“It was the cat’s fault,” he told the empty room with its clean white walls and artful taxidermy. “I almost had her. If it hadn’t been for that damn feline—” He shook his head. There wasn’t time for this now. Right now he had to do the penance that had been set for him. Later, though. Later. He drained his glass and leaned back over the keyboard.

Ur all stoopid, he typed. Shes a dog. He thought about it for a moment, then added a crying with laughter face and hit send.

Yes, he thought. There would be a later.

So, tell me, lovely people – what’s your preferred writing when you get the chance? Leave me some links if you’ve got them!

And if you would like more short stories, don’t forget to sign up to the newsletter for two free collections, plus newsletter-exclusive stories sent straight to your inbox!