I love baking. Anyone who’s been following this blog for a while – or reading… 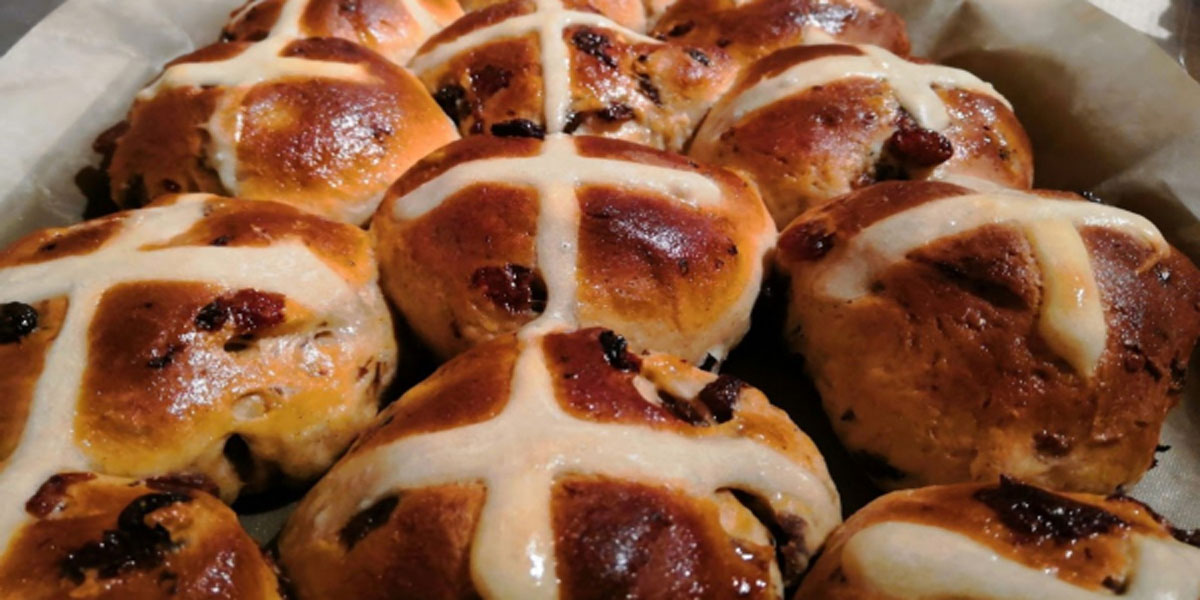 I love baking. Anyone who’s been following this blog for a while – or reading my books – knows that, for me, cake and cookies are not only writer fuel, they’re connection, self-care, comfort food, and just plain delightful.

So it’s at least a little odd that, since we went into lockdown and the world got weird, I’ve been baking a lot less than normal. Well, baking a lot less cake than normal, anyway. After a brief moment of panic when everyone bought all the tea and biscuits, there’s been no shortage of dark chocolate digestives, and I’ve been otherwise engaged.

Because I have discovered sourdough.

Honestly, I blame The Great British Bake-Off. Bread week resulted in my discovery of no-knead bread, which is perfect for someone like me, who lacks the patience to pummel bread for half an hour, no matter how weirdly satisfying it is. Plus, I get stressed by trying to decide just how much kneading is too much kneading.

Then it was hot cross buns, which were glorious, and probably gave me a false sense of confidence regarding my bread-making abilities, despite the fact that I mashed up about three different recipes to get the end result, and so will never be able to repeat them (the SO points out that this is a frequent issue with my cooking).

And then I fell down the sourdough rabbithole. Because it is a rabbithole. It’s all alchemy and magic, levains and autolyses and mysterious hydration percentages and capturing wild yeasts that roam the world like little free range bread monsters. I mean, I already considered bread making to be magic, just because you can leave this lump of flabby dough in a corner for an hour or so and come back to find it’s turned into magnificent, billowy perfection. To be able to capture little yeasties and get them to do it for you … Yeah, I had no chance of resisting.

Of course, sourdough is a strange sort of learning curve. People talk about height above sea level and how that affects proving times, and using proving (proofing? I don’t know) boxes, and those instant-read thermometers you use to check meat, and altering hydrations, and … there’s lots. Which is to say, it’s not as simple as just follow the recipe, but as I’m really bad at that anyway, it kind of suits me.

Nope, no idea why Bernard Black sprung to mind when thinking of what to name a strange organism.

So – adventures! I made a starter. His name is Bernard, as in Bernard Black of Black Books, and if you haven’t watched that series yet, why are you reading this? Go and watch it immediately (it’s on All4 in the UK, and also on Amazon Prime – I’m not sure for other countries). I used this recipe from Borough Market to make the starter, as it didn’t use a ridiculous amount of flour, and it being the early days of panic buying when I started this, there was no flour to spare. It worked exactly as it says in the recipe, only once I had Bernard on the go I reduced him right down so I didn’t need to either feed or throw away as much.

It seems you can actually keep a really tiny starter, when you read around. Some go smaller still, but so far I’ve found 60g works really well – when you have to feed it, that means only 20g flour and 20g water to add to 20g old starter when you refresh it. It minimises the amount you have to throw away, and also means no giant jar in the fridge. Plus it’s plenty to build up for baking.

Bernard is much better behaved in smaller quantities, too.

Keeping a starter alive sounds pretty labour-intensive, and initially I wasn’t sure I was ready for the responsibility. After all, the SO has twice brought starters home from work to babysit them, and he had to use apple juice and fuss over them twice a day, but those were obviously fancy starters.  Bernard’s pretty low maintenance. He lives in the fridge, and I give him a couple of feeds before I use him, but otherwise he sits there quite happily and gets a little feed once a week. I think you can leave them even longer, but I’ve not tested it yet. Trial and error has proved that he likes wholewheat flour – white he goes through too quickly (rises and falls fast), and rye seems to just turn into cement, although it’s meant to be the best for a starter.

I’ve tried a few different recipes for the bread itself, with results ranging from photogenic but a bit dense (the bread, not anyone I know), to ugly but tasty, to Paul Hollywood would definitely disapprove but I’m still going to eat it. My favourite so far is Brotokoll’s no-knead version. I don’t think there’s actually any less kneading (which is to say, there’s none) than in the other recipes I’ve tried, but it just comes out with a nice crunchy crust, big open crumb, and tasting glorious. Plus it’s a small loaf, which fits easily in my pot and means I only have three bags of sliced sourdough in my freezer, not … many.  I’d say it’s a good size to do two people for a couple of meals. Although, that does depend just how much of a bread monster you are. I’d singlehandedly eat half that loaf in one sitting if I didn’t make myself freeze most of it straightaway.

Okay, so – bread has been (sort of) mastered. But I had all this discard, the bits of starter you throw out when feeding, and there are loads of recipes for them, so obviously I had to give them a go. I mean, it’d be a waste otherwise, right?

Sourdough discard brownies. These were just ridiculously good.  I have no photos, because I ate them all, because they were that good I forgot I should be taking photos.  Be warned, though – these are the sort of fudgey, dense brownies that brownie dreams are made of, so if you prefer something a little lighter and more cakey, they’re not for you.

Discard Chocolate Cake. This sounded like a huge recipe, so I halved it but kept the same amount of coffee, and the icing sounded excessive, so I made my own simple mocha icing. It’s a light, tasty cake with a lovely delicate crumb to it, and next time I doubt I’d even ice it. It doesn’t need it!

How quickly did I eat it? That’s not relevant.

Crumpet/pancake thingies.  To be fair, I didn’t have crumpet rings, so maybe these would be better if they came up nice and tall like crumpets. And also as Bernard is all wholemeal, it may have changed the taste. They were … weird. Kind of reminded me of buckwheat crepes.

Discard scones: I’m still conflicted about these. They didn’t rise much at all, and as well as using sourdough they also asked for lemon juice and buttermilk (for which I always substitute clabbered milk, which meant more lemon juice), so they had a weird, strong tang to them. But they were very delicate and soft, and honestly, once you have butter and jam on them…

Pizza base: Okay, this one I’m willing to chalk up to user error, and I have half the dough still in the freezer to try again. User error being, I rolled the base out then immediately topped and baked it, completely forgetting it should have had a second rise after rolling out. And it still puffed pretty well around the edges, and tasted good, so … this may move to a win.

Of course, all that cheese (mature cheddar, YUM), probably helped on the flavour front)

Discard Pasta. Again, likely user error. I rolled everything out all nice and careful-like, cut some wonky strips, then piled them all in a bowl while the water boiled. By the time the water was ready, everything had stuck together and I had a bowl of dough with some noodles on top. It was late and I was hungry, so I rolled them out very quickly and did it again, but without taking the time to get them really thin. This resulted in weird dumpling noodles, that puffed up wildly when cooking and were like misshapen wholemeal eels swimming about in the pot. On the upside, if you ever want to send someone to the bottom of a swimming pool while making it look like an accident, just feed them a bowl of these first. The SO’s trying to convince me to try again, as he says making pasta is therapeutic, but a) what’s he trying to tell me here? and b) eating nice pasta bought from the shop is also therapeutic, and much yummier. So we’ll see on that one.

And finally, less “nope”, more “lesson learned” – if you leave the dough on the cat’s windowsill, you should probably cover it with something more solid than a tea towel…

I’m sure she just felt it needed knocking back…

And that is my sourdough adventure so far! It’s been a most tasty sort of adventure, I have to say.

How about you, lovely people? Have you tried something new during lockdown? What have you discovered? Let me know below!