Yes, it is technically short story week. But it’s my blog and I can change things… 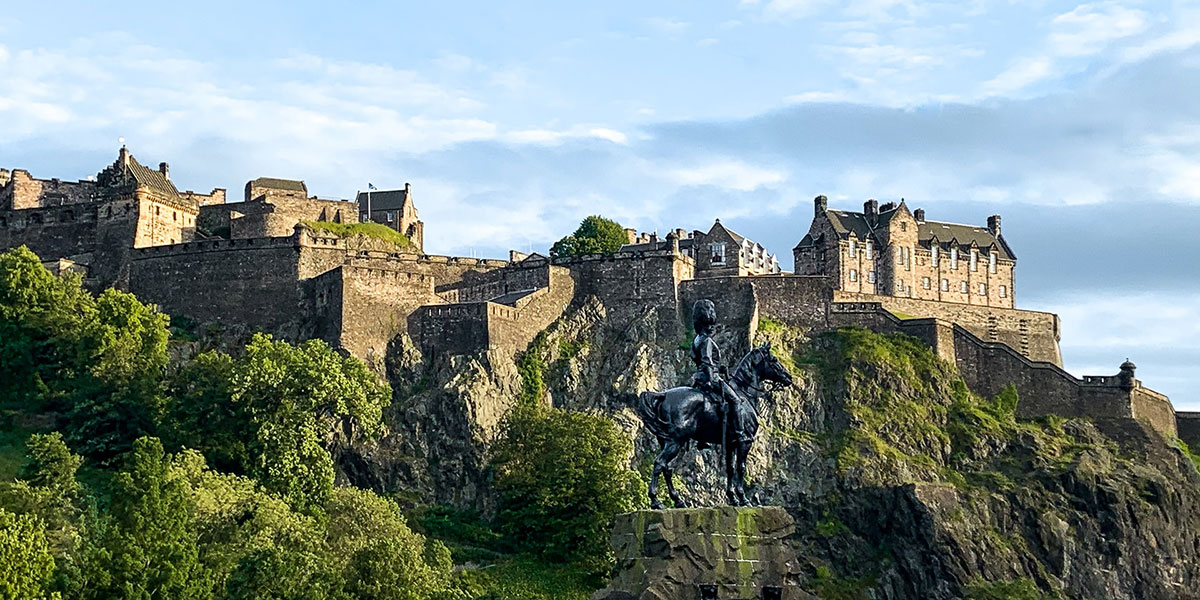 Yes, it is technically short story week. But it’s my blog and I can change things if I want.

Okay, truthfully? I’m behind again on my short stories, and although I have three written and one half written, I’m not entirely happy with any of them.

If you’re on social media with me (hi!) you might have noticed that the SO and I went to Edinburgh for a long weekend, where we encountered rather non-Scottish weather, lots of good food, and plenty of bookshops. I knew it was going to be a good trip before we even got to the hotel, as on the way I spotted a man in a kilt, a castle (I thought – turned out it was a historic building set in large grounds that was being converted from a school for the deaf into apartments. But still), then another man in a kilt, all on a Thursday midnight. This, I felt, was the sort of city I could get behind. And it was just as wonderful as that first glimpse promised, so I’m going to swap out story week to  share a few things we did and have an excuse to use some of the approximately 723 photos I took.

First glimpse of Edinburgh from Calton Hill on the first morning.

View of the castle from halfway up.

1. Scott Monument. The biggest monument to a writer anywhere in the world, this was the second thing we did in the city. The first was “look at this path going up the hill by the hotel. Let’s see where it goes”, which turned out to be Calton Hill (more on that later). We were up and out early – we’re pretty useless at planning days, so we headed from Calton Hill down into town with nothing much in mind other than looking for food. Having spied the spire of the monument from the hill (“It looks like something out of Mordor,” the SO said, which was a little harsh, but actually fairly accurate), we went to gawp. It’s impressive enough from below, all gargoyles and fanciful spires, and it was just opening as we arrived. Tour with no other tourists? Yep. It’s cheap to get in (£5), and it’s deceptive – looking from the outside, you think well, I can get up to the first level, that’ll be nice. But no – you can climb all 287 steps, as the walls get tighter and the roof gets lower, until you finally have to wriggle out sideways onto the top balcony, with spectacular views all across the city. Not recommended if you don’t like stairs or tight spaces, and definitely take it easy on the way down (all that round and round on the spiral staircase gets a bit dizzying), but it was probably my favourite sight in the city.

Nicely creepy inscription above the door, too.

2. The Writer’s Museum: Obviously. Tucked down an alleyway off the Royal Mile, surrounded by flagstones carved with quotes from famous Scottish writers, and a completely beautiful little house. Rather than being cold and a little sterile, Lady Stair’s House is full of warm colours and personal memorabilia of the three writers it commemorates – Sir Walter Scott, Robert Louis Stevenson, and Robert Burns. And the main room, which houses a little shop, is so inviting I wanted to curl up in a chair and read for a bit. As I couldn’t do that, I bought a book called a Bestiary of Scottish Beasties. Because it’s research, people. Research.

Of all Alexander McCall Smith’s series of novels, the 44 Scotland Street series is my favourite (although I haven’t read any Corduroy Mansions yet – I did acquire one while in Edinburgh, though…). It’s whimsical, charming, funny and philosophical by turns, and I fell in love with the characters the first time I read Espresso Tales. So although I didn’t go searching for Scotland Street, when I spotted Drummond Place (where Angus lives with his glass-eyed dog Cyril), I knew it had to be close. And I can report that it really must be a lovely street, because it has a little free library, and at the end of the street is a park that used to house Victorian exercise machines such as the Great Sea Serpent. Which is wonderful in its own right.

A bag of books. Oops.

4. Bookshops: The City of Literature, quite rightly, has so many bookshops that it has a bookshop trail and an app. Fortunately or unfortunately, the app’s only available for iPhones, so we had to make do with a list we got from the information centre. However, I had to expand my carry-on and bring it back as a checked bag, so I think we did okay on that front. I think doing the actual book trail may have led to book overload and a collapse when I realised I couldn’t take all the books home with me.

The SO appropriately modelling a bookshop bag in Makars’ Court.

5. Makars’ Court: Okay, so this is a bit of a cheat, as technically Makars’ Court is sort of part and parcel of the Writers’ Museum, and is where all those lovely quotes are inscribed in the flagstones. However, I feel it deserves its own entry, as it’s a lovely spot to potter about, reading and hiding from the throngs of people roaring up and down the Royal Mile (I’m not good with crowded sight seeing. I like the hidden spots). There’s also a restaurant next to the court called Makar’s Rest, which has quotes papering the walls, and which serves a rather nice veggie haggis. Make sure you’re not eating for a day or so after, though. It’s filling.

2. Arthur’s Seat: Slap bang in the middle of the city is a rather large green hill, full of lovely rocky faces and wound about with a network of paths (we managed to find one of the less travelled of these, so arrived on the top by a very direct and rather sweaty route). It offers both stunning views in all directions and the feeling of having escaped the city to the country – on foot. And despite the fact that it’s obviously very popular, there are plenty of quiet spots to sit and look at the view, even on a sunny Saturday morning. Plus it’s a possible location for Camelot, so, cool.

3. Calton Hill: Having staggered out of the hotel fairly early on the first morning, we spotted a hill, so we climbed it. We did not realise it was Calton Hill, so did not expect part of a Parthenon to suddenly appear as we wandered to the top. We also did not expect to encounter stunning, sunshiny views across the city, Arthur’s Seat swimming in morning light, Nelson’s Monument, and not one but two observatories. It was a good start.

The old town from the castle.

4. Edinburgh Castle: I loved the castle, but actually think I preferred looking at it from the outside, particularly from St Cuthburt’s Church grounds, which are green and beautiful, the sheer sides of the rock looming above them and the castle perched on top. Inside was, obviously, busy. Very busy. I hate to think what summer’s like. But the audio tour was interesting, and the history fascinating, and the views (again) amazing. Next time, though, I think I’ll sit in the (dead) quiet of the churchyard and look at it from there.

The castle from St Cuthburts

5. Cemeteries:  I’ve always loved wandering in old cemeteries, looking at the inscriptions on the tombstones and imagining the lives of those gone. They’re quiet, peaceful places, and for all my horror reading I’ve never been afraid of them. And there are some beautiful ones in Edinburgh, if that’s your thing. At the castle, there’s a cemetery for dog soldiers, which is small but very sweet, then there are three others we walked around – New Calton Graveyard, with its views over Holyrood to Arthur’s Seat, and its tower where the watchman and his family lived, protecting the dead from grave robbers, is bare and open and oddly abandoned feeling. Old Calton Burial Ground is enclosed and insular, presided over by the tomb of David Hume and the Political Martyr’s Monument. It’s a place of whispers and crowded silence. Finally we went to St Cuthburt’s, stumbling on it as we skirted the castle on the way to Grassmarket. Richly green with spring growth, well-used paths cut through it to connect Princess Street Gardens to roads on the other side of the churchyard. The tombstones are old, cracked and moss covered, but it feels alive, a part of the city with the rock and the castle leaning over it and joggers and walkers peopling the shadowed trails. Plus, I’m sure I spotted a house that Gertrude the reaper would just love. It’d be convenient, too.

So that was Edinburgh for me. I loved it, and can’t wait to go back and explore some more of Scotland. Have you been? What are your must-sees?