Let’s be clear here. I’m highly sceptical of any recipe which tells me the cake… 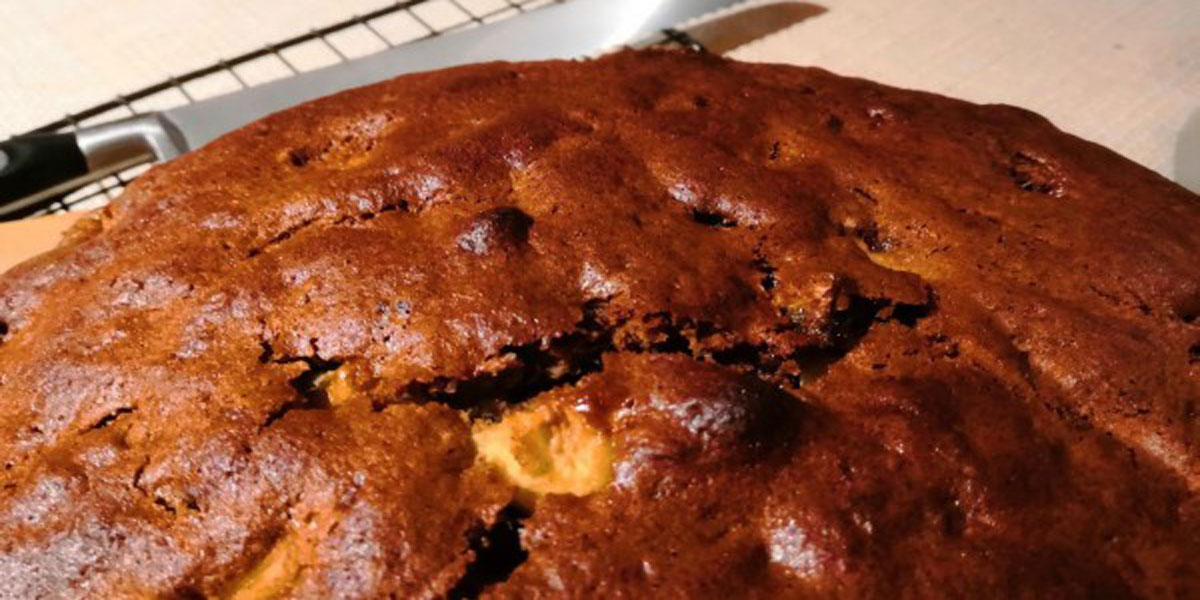 Let’s be clear here. I’m highly sceptical of any recipe which tells me the cake is better eaten the next day, or even a few days later. This indicates to me that either the baker has superhuman levels of self-control, or their cake isn’t that enticing. Possibly both. And while I accept that certain fruitcakes are designed to be squirrelled away and drenched in booze for a few months before serving, those aren’t the sort of cakes I’m looking for.

So when I discovered an apple cake recipe that said the cake was better the next day, I sniffed a bit and got a little doubtful about my recipe choice. However, this was a recipe in Ottlenghi’s Sweet, from which I’d already baked the spectacular Coconut, Almond, & Blueberry Cake. And I generally like his recipes. They’re full of interesting flavours and nothing I’ve tried has been stodgy or boring. And I fancied something different to my Spiced Apple Cake (not sure why, as it’s amazing…).

Having announced to the SO that I was using dates instead of sultanas, and adding toasted walnuts (he didn’t even look surprised that I was doctoring an untried recipe. I think he’d have been more surprised if I hadn’t), I jumped in. Then discovered I didn’t have enough apples, and that the dates didn’t work as intended, so I added more dates.

Yes, they may *look* this good, but sometimes cake is the only option for a floury, disappointing apple…

And, you know, it turned out nicely. It rose high, and it was lovely and moist, and, well. It was nice. Maybe I should have iced it, like the recipe said. I didn’t because I’m lazy and can rarely be bothered, plus we had no maple syrup or cream cheese for the icing part of the recipe. I think, at this point, my level of baking organisation surprises no one.

But it wasn’t a wow cake. It wasn’t amazing. I was oddly unenthused, for someone who tends to be enthused about pretty much any baked goods.

Until I tried some the next day. And the next. Because, oh yes. Yes, this improves. It doesn’t need icing. It just needs a little time to mature.

I shall no longer be looking sideways at cakes that tell you to leave them a day or so. I shall be celebrating the older cake. Some of us are just better with age…

Now tell me, lovely people – do you have a favourite make-ahead dish, sweet or savoury? Let me know below!

It… it is a substantial cake.

Preheat oven to 180C. Grease and line a springform cake tin with high sides (this is a big cake! I froze half).

Pop 100 g chopped dates or your sultanas in a saucepan with 200 mL of the water. Simmer until absorbed – the dates will go really squidgy, which is another reason I added unsoaked ones (what? Unsupervised substitution requires improvisation sometimes).

Sift flour, spices, baking soda, baking powder and together in a bowl and set aside. Peel and core apples, and chop into small-ish dice (the recipe said 2 – 3 cm – I went a bit smaller but still think they’re a bit big). Set aside.

Beat sugar, olive oil, whole eggs, vanilla and lemon zest on medium speed for 6 – 7 minutes, or until the mix is light in colour, doubled in size, and thickened a little. Add apples, dates or sultanas, remaining 75 mL of water, and walnuts (if using) and fold in gently. Next fold in dry ingredients.

In a separate bowl, beat egg whites until soft peaks form, then carefully fold into rest of mix. Scrape the lot into your cake tin, and bake until a skewer comes out with just the odd crumb clinging to it – likely 55 minutes or a bit longer.

Let cake cool in tin and, yes, give it a day before you dig in.

I can’t believe I wrote that.

So hard to leave it for a day, though!

Now over to you, lovely people!

What are your favourite make-ahead dishes? Let me know below!