So. Fruit cake. Christmas fruit cake, at that. It’s an odd beast. Dragons rather enjoy… 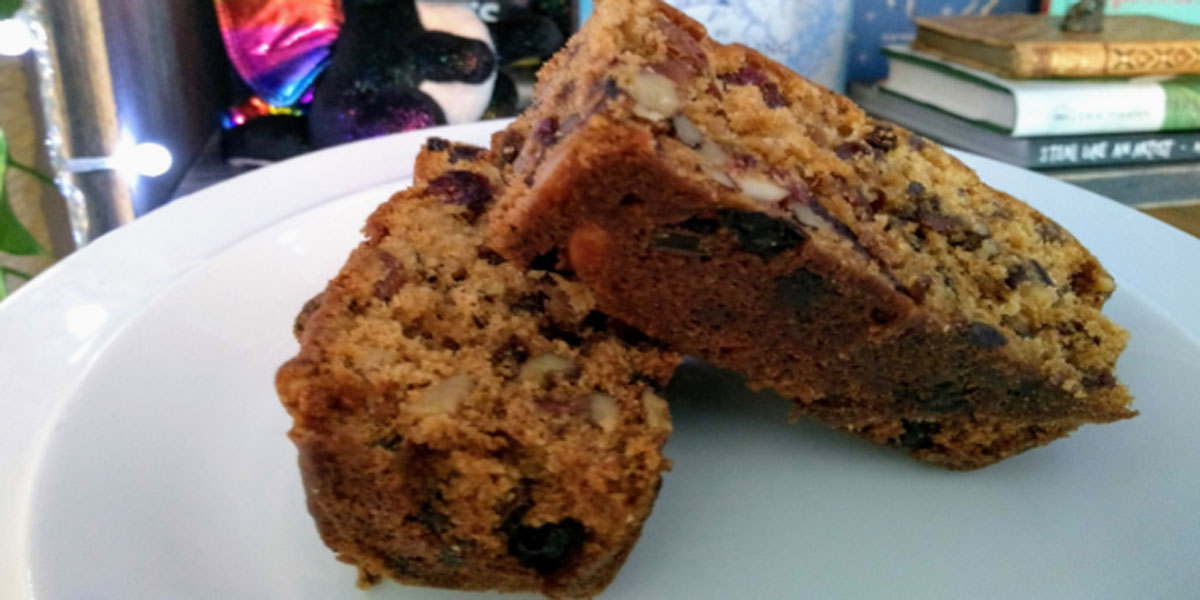 So. Fruit cake. Christmas fruit cake, at that. It’s an odd beast. Dragons rather enjoy fruit cake, particularly dipped in eggnog, but maybe it’s something to do with their fire-breathing tastes. I mean, the cake itself is nice, but then everyone goes and plonks a load of weird plastic icing on top. You know. Marzipan. Ew. As far as I’m concerned, it’s fun for making things with, but so’s modelling clay. I’m not going to eat either of them.

I have marzipan-ed before. Not to eat, though. Never that.

Then there’s the issue of the wildly varying cake quality. Some of them are so thoroughly brandy-doused that you can get tipsy on the fumes alone. Others are thankfully (for me, at least — not everyone disagrees with alcoholic cake) booze-free, but are therefore so dry it takes your entire cup of tea to get them down, after which they lurk in the depths of your intestines for about three days, fermenting. Still others are loaded with candied fruit and glace cherries, including those weird green ones that look like they come out of the Springfield nuclear plant. I mean — does anyone actually eat those?

Not that I’m fussy or anything.

I like cake. I like dried fruit. Most of it, anyway. Let’s just be clear that the glories which are pineapple, mango and papaya should never be reduced to shrivelled, sugar-encrusted morsels. That’s just wrong. As wrong as nuclear green cherries. And I’m not even going to deign to mention the monstrosities that are banana chips.

What was I saying? Oh, yes — that I like most dried fruit. And like is too mild a term for my attitude to cake. Cake is life, after all. And every now and then I do stumble upon a fruit cake that is tender and moist and full of wintry spices, their flavour offering a counterpoint to the sweet-tart fruit rather than being overwhelmed by it. It’s the sort of cake that would mature well if left for a while, but rarely gets the chance. It might suit being served with a crumbly wedge of Wensleydale cheese for morning tea, or with a dollop of cream for an indulgent dessert.

And it is categorically not topped with marzipan.

Top tip – wear gloves. Food dye sticks to you better than it does to the icing.

Which is where the SO, utterly amazing supporter and truly excellent pastry chef, comes in. He assured me that he had a recipe for just such a cake, and that, even better, it was easy to make and likely resistant to my habits of reckless substitution.

Please note that he did not say he’d make it for me. Although he did do all the mixing because my wrist’s in a support, so I guess you could call it a team effort.

Combine dried fruit and nuts, then toss with about ¼ cup of flour. Set aside. (Me: is this a way to find out how many bowls we own?)

Beat butter and sugar until fluffy, then mix in egg. Follow with vanilla, orange rind and finally the sour cream mix. Then add flour, salt and spices, stir to combine, and finally add the fruit and nuts.

Pour into prepared loaf tin and pop in the oven. Add a separate pan of water to the oven, either beneath or beside the loaf, because magic. (The SO: Not magic. Even cooking. Me: I know. Magic. The SO: shakes head.)

Bake for about an hour and a half, or until a skewer comes out clean. You may need to top up the magic water during baking.

Eat immediately or wrap tightly to store. If storing, you might want to sprinkle it with a bit of brandy to keep it moist and enhance the flavour.

How about you, lovely people? Do you like fruit cake? How does this measure up to your favourite recipe? And what are your favourite wintery treats? Let me know below!

If you’re looking for more dragon-approved recipes, you can find them in the Beaufort Scales cosy mystery books — this is in Yule Be Sorry. And if you’re wondering where to start, Baking Bad is currently free at your favourite ebook retailer!