All the glory and impressiveness of fancy bread, with none of the work … 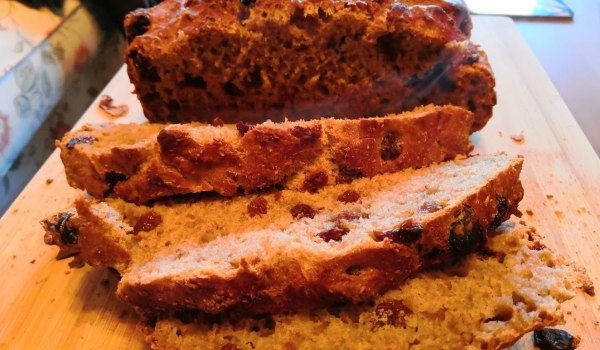 Until moving back to the UK this summer, I’d only ever watched parts of one series of Great British Bake-Off – not that I was disinterested (after all, it’s a show about cakes, bread, and biscuits. Of course I’m interested), just that it was one of those things I never got around to. And I’d also kind of underestimated just how gripping the show could be. I never realised that bread week could have me holding my breath when someone’s rolls are being tested (please don’t be under-baked, please don’t be under-baked), or that technical challenges could have me shouting at the TV, because I’ve never heard of it either but how do you think that’s going to work if you don’t whip the egg whites, goddammit? Or that I would develop a fear of soggy bottoms, and kind of want to throw cake batter at Paul Hollywood for skulking around the tent smirking at bakers like a schoolyard bully just getting warmed up.

So, obviously, I have discovered the compulsive viewing that is GBBO. And, oddly, all those cakes and biscuits don’t really stir me to bake, maybe because I bake quite a lot already. But bread week. Bread week. It just makes me crave the scent of baking loaves, the beautiful scatter of flour on counters, the magical alchemy of rising dough in the corner of the kitchen. I’m not fussed about plaits and rolls and brioche and fancy baked bread baskets, but a good chunky loaf, still warm and slathered with butter? Yes please.

The thing is, I’ve not made much bread. We used to have a breadmaker, which actually got a lot of use, especially on weekends when we’d set it up the night before so we could get up to warm, fresh-made bread, smelling glorious but of a rather unpredictable size (one week almost busting the lid off the machine, the next a sad little pancake lurking in the bottom of the tin). I’ve made pizza dough and foccacia with varying degrees of success, and I did make hot cross buns a couple of years ago, coincidentally from a Paul Hollywood recipe. They were terrible. Lots of work (three rises. Three!), looked beautiful, tasted boring. But other than that, I’m not much of a bread-baker.

No it was not, Paul. Terrible buns.

And then, with that lovely serendipity that pops up here and there in life, while I was craving bread the lovely and talented Jackee Rohrbach shared a no-knead bread recipe on twitter. And, especially after the hot cross bun debacle, that sounded like just my sort of thing. The SO, being a pastry chef, was exceptionally sceptical, but I tried it anyway, because why not. I mean, you can’t get much easier than chucking a bunch of things in a bowl, mixing it briefly, then abandoning it for 24 hours. Which was as technical as it got.

And, lovely people, it was heavenly. I left a sludge of dough in the kitchen that night, and came back in the morning to a fat, risen beast. It baked perfectly. Thick, crunchy crust. It smelt gorgeous. No idea about the crumb or any of those expert things, but it tasted absolutely amazing with lashings of butter, which is good enough for me.

What was probably less good for both the SO and myself was that I then kept making variations on the theme, and we had about two weeks of bread for at least one meal every day. I have since eased off. But it was most wonderful while it lasted.

All the waffling aside, one of my discoveries in this time was raisin and cinnamon bread, because what is the weekend without raisin toast? This is loosely adapted from about four different recipes, all of which started from the original no-knead bread recipe by Jim Lahey, which you can find here. There are many, many variations out there, and the only one I’ve tried that hasn’t worked is the no-knead pizza dough. That … that was messy.

This is not. This is glorious.

And I may turn it into hot cross buns, just because I think it would really upset Paul Hollywood and his three-knead smirk…

Chuck all dry ingredients in a bowl, keeping the yeast and salt on opposite sides. Give them a bit of a mix to combine. (I know – now the salt and yeast are together. But it’s magic, okay? Probably it’d still work if they weren’t kept separate at the start, but magic.)

Pour in water and mix just until you have a claggy dough. Cover the bowl with a tea towel and leave it somewhere warm for 18 to 24 hours.

Okay, now the fun starts. Tip your dough onto a floured surface and push it out into a rough rectangle. Fold in thirds, then pop it back in the bowl, seam-side down. Cover and leave for an hour or so.

About half an hour before you want to cook your bread, get your oven pre-heating at 230C with an ovenproof baking dish of some kind in there, preferably with a lid. I use a Le Creuset, which I think is the same as a Dutch Oven in the US. If you don’t have one, a Pyrex or similar dish with another turned upside down as a lid will work nicely, or you could even use foil (don’t pre-heat that, just preheat the dish and add the foil after you add the dough). There’s magic at work again here, this time involving steam being trapped around the bread while cooking, so you do want to be able to cover it somehow.

When your oven and dish are ready, pull the dish out (be careful! It’s going to be exceptionally hot. I use about four tea towels for this because I’m clumsy) and tip the dough in, so it’s now seam-side up. Pop the lid back on, or cover with your make-shift one, and shove it in the oven. Bake for 45 minutes, then take the lid off and bake for about another 10 minutes or so, until the top’s nicely golden.

Tip your bread onto a rack and wait patiently for it to cool.

Ahahaha. No. I ate it piping hot with lashings of butter. But it will cut better if you let it cool.

We did actually get about three days’ breakfasts out of this.

Now tell me, lovely people – do you bake? What are your favourite things to whip up? Have you made much bread? Let me know your favourites below!