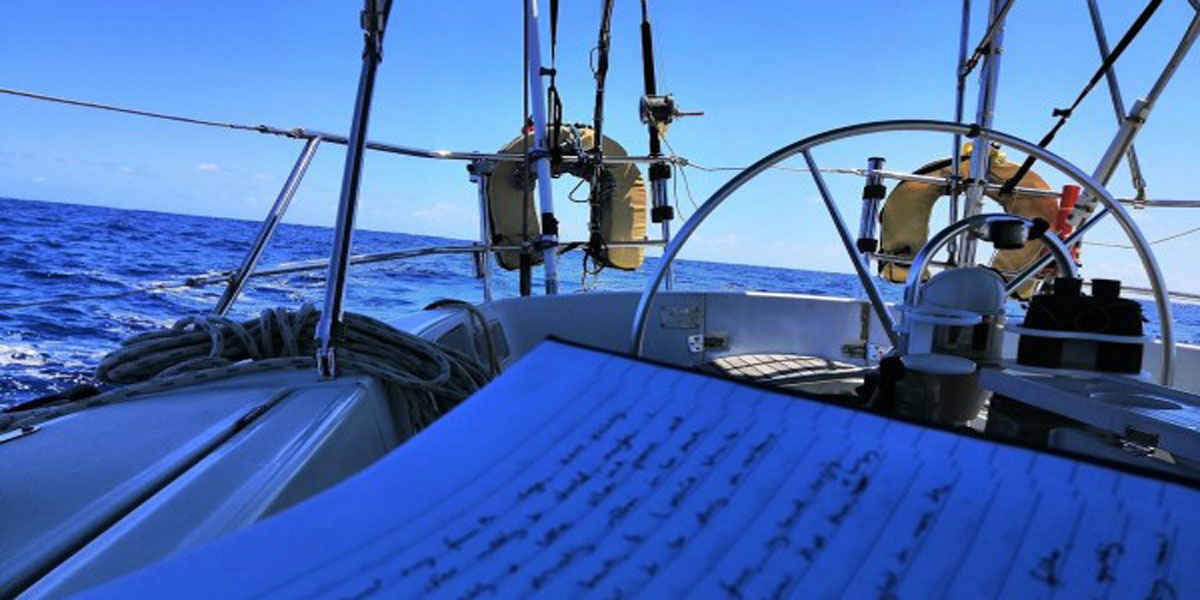 Is there anything more glorious than just sinking into your TBR and reading all the books?

Although, it does illustrate just how out of control the TBR is when you have most of a month to do this and your e-reader’s still spilling unread books over the edges. And that’s without even making eye contact with the physical book TBR, because, well … it’s just better not to, okay?

The question of whether it’s hoarding if it’s books aside (it’s not. I’ll defend that to the death, probably by toppling TBR), if you follow me on FB, IG or Twitter, you may already know that I was away for December, and spent two weeks of that time on passage, taking a boat from Tonga down to NZ. This meant lots of writing time and lots of reading time, both on the (far too many) planes and on the boat. Which was glorious and wonderful and reminded me just how amazing it is to binge on books.

See, I did work. There was writing…

I mean, seriously. It’s glorious. Being able to just curl up and read for hours, through night watches or during the day, interspersed with the odd cup of tea or to watch seabirds or pilot whales. Drifting from one world to the next, sinking into one character then another. I haven’t done that much dedicated reading for years. And let me repeat – it was glorious.

The only problem is coming back and trying to do a book vid while jetlagged and unable to remember the words, or what book you’re talking about. But it’s a small price to pay, right?

All that said, let’s get on to the books. The first four are my favourites of the ones I talk about in the vid, and below the vid you’ll find the rating for the others. Have a watch, then let me know below what your favourite reads for December (or the year) have been!

…and the making of words by other methods (namely, quiddler. It was HIGHLY competitive).

A Natural History of Dragons, Marie Brennan. An engaging, entertaining read, told in the style of a Victorian lady’s memoirs, if said Victorian lady was rather more interested in tracking down dragons than throwing tea parties. It’s not a grand adventure of a read, but it’s beautifully well-written, and as much the story of a woman determined to create her own place in a world that sees only her perceived limitations as it is a discovery of dragons. Five cookies and a cuppa, with maybe a finger sandwich on the side.

“Be warned, then: the collected volumes of this series will contain frozen mountains, foetid swamps, hostile foreigners, hostile fellow countrymen, the occasional hostile family member, bad decisions, misadventures in orienteering, diseases of an unromantic sort, and a plenitude of mud.”
― Marie Brennan, A Natural History of Dragons

Here Be Dragons, Hannah Steenbock. A fun collection of short stories, full of magic, adventure, and dragons. Obviously. There are also evil wizards, unicorns, and magic cards, among others. It’s a quick, easy read and a great introduction to the author, showcasing well-written stories with lovely twists on both fantasy and fairy tale tropes. Five cookies.

“Welcome to this journey. Please find a comfortable seat, select your favourite food, grab the beverage of your choice and get ready for the ride.”
― Hannah Steeenbock.

Circe, Madeleine Miller. Beautiful, poetic, and dripping with all the drama and violence of Greek myth. This is a stunning retelling, moving Circe into the role of a daughter out of favour with her father, a woman misunderstood and underestimated by all around her. It’s not easy reading, and as with all Greek myths, the gods are as petty and vengeful as the humans. Circe is not exempt from this, but her journey of both empowerment and discovery is full of understanding. Five cookies, some honey wine, and a few enchantments to spice things up.

Regulation 19, P.T. Hylton. A kind-of dystopian story full of interesting characters and an original, intriguing setting. I’d pretty much given up on dystopian stories, as I went through a run of so many that just felt the same. Predictable storylines, cliched characters, and a desperately bleak outlook on humanity. This, though, was well-written, with characters in all shades of grey, and the actual set-up of the world I found really interesting. Five cookies.

“In another time and another place, you could have been great. But you never get out of your own way.”
― P.T. Hylton, Regulation 19

And on to some very short reviews of the other books…

The Colour of Bee Larkham’s Murder, Sarah J. Harris. An interesting, well-written murder tale with a twist. Draws inevitable comparisons to The Curious Incident of the Dog in the Nighttime, but holds up well. Four cookies.

One of Us Is Lying, Karen M. McManus. The Breakfast Club with murder. Well-written, and it kept me reading, but the characters were cliched, the POVs pretty interchangeable, the tropes were heavy (and in some cases unpleasant), and the ending didn’t work for me. Three cookies.

A Man With One of Those Faces, Caimh McDonnell. Well-paced, funny crime read. Writing was pretty good, and the characters were well-drawn. A good holiday read. Four cookies.

Monsters, Emerald Fennell. Disturbing, readable, and interesting crime/mystery/dark comedy/thriller/something. Great narrative voice, and bizarre in good ways. I like. Five cookies, and a decision not to go to any picture-perfect Cornish seaside towns.

Hero Forged, Josh Erikson. Another reluctant hero, this one a con man who takes on a job that results in him being half-possessed by an ancient demon. Well-written, with a nice touch of humour, and I did like the MC, as well as his succubus sidekick. Four to five cookies.

The Last Temptation of Iago Wick, Jennifer Rainey. Clever demon almost gets caught by even cleverer demon hunter, much to the distress of said demon’s lover. Well-written, but didn’t really grab me – I didn’t care all that much for Iago. Four cookies for decent storyline, characters, and writing, though.

The Housewife Assassin’s Handbook, Josie Brown. Entertaining, light read. Best part was the household hints at the start of each chapter, including how to apply them to body disposal and/or murder. Three to four cookies.

The Devil and the Deep, Ellen Datlow (anthology). For some reason I really like reading horror stories set at sea when I’m at sea. I know this is weird. But these were, for the most part, good stories. Four cookies.

I didn’t read or write ALL the time. There was this sort of thing to do, after all…

And there we go – a month of reading! There were some craft books and a few DNFs I haven’t included, as well as four rage-reads, which I only finished because I was hoping they’d either somehow pull it all together at the end or that the MC would have a truly spectacular comeuppance. Disappointingly, this was not the case in any of them, but I don’t really like writing reviews of books I don’t enjoy. It feels a bit mean. And, overall, I had a fantastic month of reading, so I’d rather talk about the books I did enjoy…

Despite all this, I’m still not sure what my best read of 2019 was. I’m terrible at choosing such things. So tell me yours instead, and that way I can make sure my TBR remains at critical mass…