An easy Bakewell slice recipe that may not be traditional, but it’s perfect for dragonish picnics … 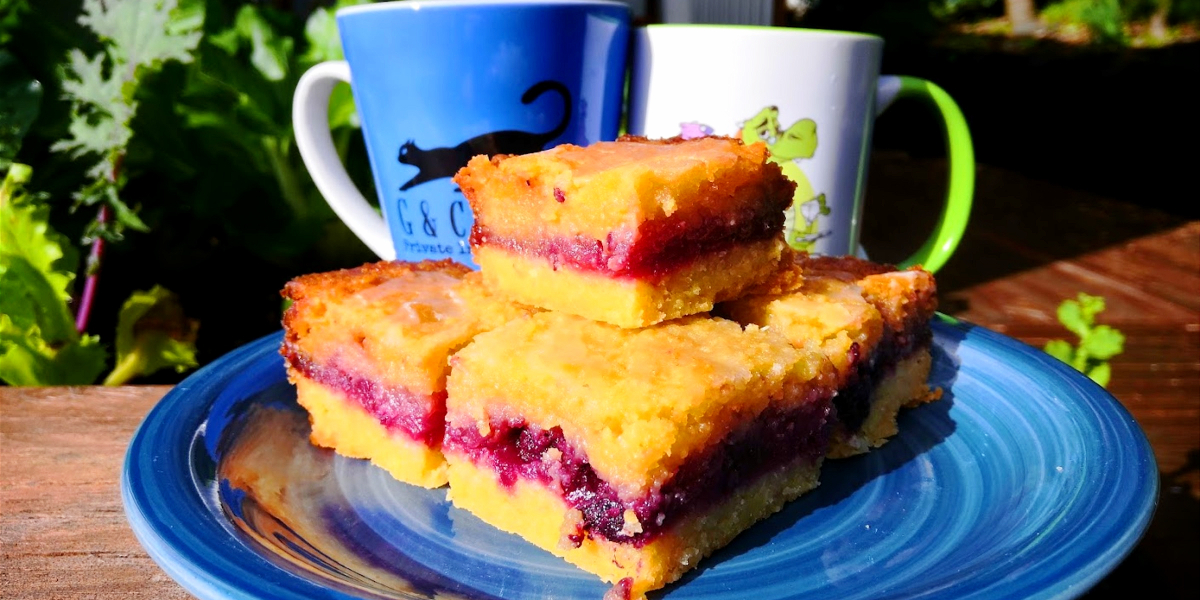 This is how baking tends to happen in my house:

I did have good intentions with the Bakewell tart, mind. It feels very Women’s Institute, perhaps because of the dollops of lovely jam and neat pastry work that goes into it. And while I’ve never been a fan of the Cherry Bakewell, which is the one you normally run across in shops in the UK (they’re topped with tooth-achingly sweet almond icing and – ugh – a glacé cherry), the classic Bakewell is a delight of soft frangipane and tart jam, all supported by a sturdy yet tender shortcrust pastry shell.

And while they’re simple, they’re also very pretty, with their soft dome of almondy filling and a tasteful scattering of flaked almonds to finish them off. Plus, of course, if you want to go down the icing route, you can get very fancy on the top, such as in the example from (who else) Mary Berry below.

I’m pretty sure I don’t have to tell you that my Bakewell is not Mary Berry standard.

Firstly, I wanted Bakewell slices, not a tart, because the latest Beaufort features a certain amount of hiking and picnicking, and I didn’t feel a large tart was best suited to that. Or little tarts, for that matter, although a certain amount of that is to do with the fact that I don’t like lots of pastry, and it’s quite hard to get that proportion right in little tarts.

I’ve now said tart far too much, and can’t even find the right Bake Off GIF to accompany it, so I’ll move on.

Obviously, the next problem was my baking process. Well, ‘process’.

First, that bit about not liking pastry? Yeah. I mean, I don’t hate it, but mostly I like nice flaky puff pastry on a lovely pie or something. Sweet pastry is for mince pies and not a lot else, in my mind. But I do like shortbread. And shortbread isn’t so far from shortcrust, no? Plus shortbread-style bases work well for lemon squares and ginger slices, so …

Also, I like almonds, but I don’t like almond essence, because it’s just a bit too marzipan-y for me. So that was out.

Then there was a small issue with the bag of frozen berries looking like it had a lot more in it than it actually did (much of the bulk was that mysterious accumulation of ice every bag develops in the freezer, like a virulent growth of some sort), and the ground almond bag having exactly as much ground almond in it as it appeared to, but my guesswork on how much I actually needed being a teeny bit off.

You can see where this is going. Changes were made. Guesswork was rampant. Substitutions were flagrant. But I have to say that I would happily serve the end result up to a brew of hungry dragons, and would even offer a plate around at a W.I. meeting (particularly if Jasmine was there, because you know you can’t do worse than her. Sorry, Jasmine).

I probably wouldn’t call it Bakewell slice, though. It needs to be slightly off-brand. Bakewill? Bakwell? Wakebell?

I’ll just have another slice while I consider the possibilities …

Pre-heat oven to 180C / 350F (160C / 325F fan). Grease and line a slice tin – mine’s 22 x 22 cm, so around 8 and a bit inches square? It doesn’t have to be exact, but if you’re worried about the size and your tin’s rectangular but roughly the right dimensions on the shorter side, you can just build a little wall of foil to make it square. This isn’t a runny recipe, so nothing’ll get past your fortifications.

Mix your flour, ground almonds, sugar, and salt, then rub the butter in until it’s got a crumb-like consistency (you can use a food processor if you want). Add the vanilla, and the milk if needed, until you can squeeze a handful and it kind of stays together.

Press the mix into your tin firmly, and use the back of a spoon to really pack it in there. If your tin is bigger than mine you’re going to get a thinner base, which isn’t a problem – it’ll just cook a bit quicker. If it seems too thin, though, as in the jam may seep through, you’ll want to add more flour, almonds and butter to your base mix and work it all together again until you can get a decent base – mine was a bit over half a cm thick (around 1/4 inch), but you could definitely go thinner and still get a good result.

Bake for 10 minutes or so, until it’s juuust starting to brown. Pull it out and let it cool for ten minutes or so.

Just slap the jam on there in an even-ish manner. You could go really thick with it, if you were a jam fiend, or use just a light scraping for flavour, then chuck the fruit on top.

Cream your sugars with the butter, then chuck the salt, egg, vanilla, and lemon zest in and give it a quick whirl to combine. Add the ground almonds, mix to combine.

Dollop your topping in little spoonfuls on top of the filling, then spread it gently so that the fruit and jam stay put as much as poss. Top with a handful of flaked almonds (unless you forget).

Shove it in the oven and give it 35 – 45 minutes – start checking every five minutes from around the thirty minute mark. You want the centre of the top to look softly brown and mostly dry – the edges may start to brown too quickly, in which case pop a bit of foil over the top to stop things getting out of hand.

Cool in the tin, top with a drizzle of icing if desired (just icing sugar mixed with water or lemon juice to drizzle consistency) then slice and prepare for picnics!

Note: This is one of those ones where the flavours develop – I actually think it’s better a day or so later, so you can get your picnic provisions sorted ahead of time 😉

Note the second: Feel free to play with flavours. It’d be lovely with apricot jam and lightly cooked stone fruit, or if you’re a marmalade person you could add extra citrus zest to the base and topping, and just go for a thick whack of marmalade in the centre there.

Oh – and curious about those dragon picnics? Beaufort’s seventh cosy mystery, Beast Laid Plans, is out on the 15th of September! Grab your ebook pre-order at all your favourite retailers now – paperbacks will be coming closer to release date.

Now, over to you, lovely people – do you substitute and mess around with recipes? What have your best successes (and worst disasters) been with that? Let me know below!

A Beast stalks the Dales.

And the hunters are coming …

DI Adams’ missing person is a human, not a dragon. But the trails for both lead straight to the village of Eldmere, where glimpses of a mysterious Beast have drawn the attention of the nation’s monster hunters.

And where, of course, the Toot Hansell Women’s Institute and the Cloverly dragons are in hot pursuit of Gilbert. They’re not letting a valley full of weekend Yeti hunters and Nessie-loving cryptozoologists stand between them and the young dragon.

But nothing is as simple as it seems. Something strange is happening in Eldmere, and the dragons, the Beast, and the ladies of the Women’s Institute are right at the heart of it. As are the hunters, some of whom are more serious – and more dangerous – than DI Adams ever imagined.

She’s in a race to find Gilbert before the hunters do, because someone out there doesn’t just want to see a dragon. They want to finish them.