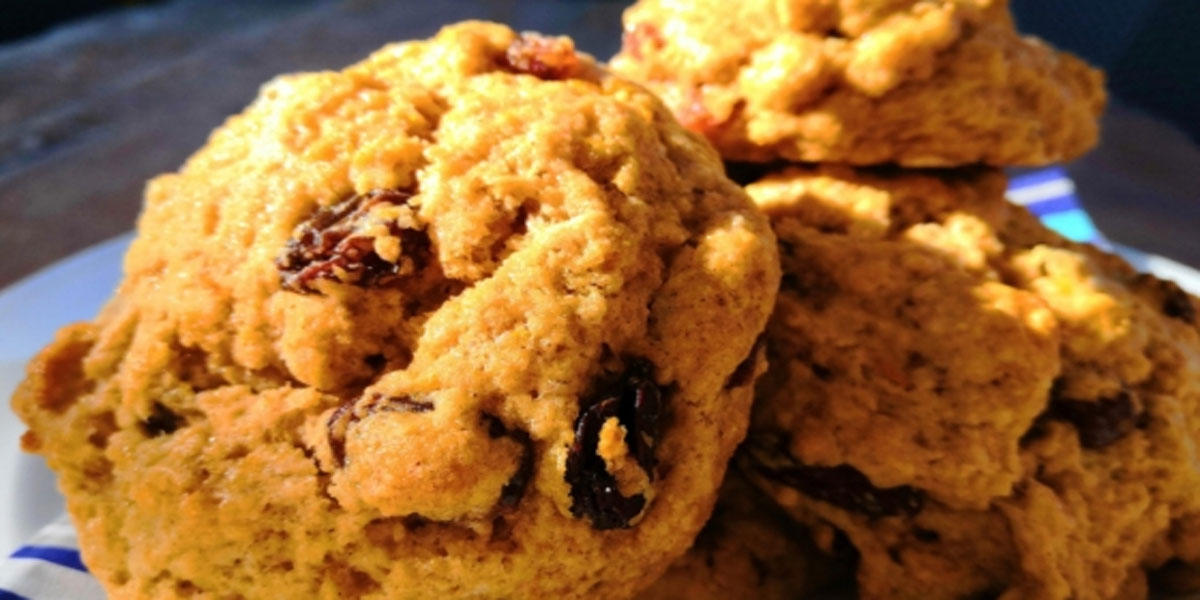 The SO has become accustomed to me running into a room (or texting him – he gets no break for being at work) and demanding, “What’s a W.I.-style treat that would be best in spring?” or “What’s a very English cake that travels well?” As the resident chef and Yorkshire native, he’s my source for all things baked and Northern, and if you’ve read Baking Bad or Yule Be Sorry, you might have noticed that he donated a lot of the recipes. But, I really should have thought of fat rascals myself when I was looking for a scone substitute.

There is a very small chain of tea rooms in Yorkshire called Betty’s, and if you have ever been to the spa town of Harrogate the odds are you’ve either been to Betty’s or been put off going by the rather alarming queues that form out the door around morning tea time. This is the original Betty’s (although I quite liked the one in the Harrogate Botanical Gardens), established in 1919 not actually by anyone called Betty, or even (so the story goes) related to a Betty. It was instead a Frederick Belmont who founded this very English tea room, and he wasn’t English, either. He was actually an orphan from Switzerland who had been apprenticed to confectioners and patisseries all over Europe and had arrived in London at King’s Cross railway station with no recollection of the address (or even city) of where he was meant to go next. Apparently, he did remember that it was near Bradford, so someone put him on a train to Yorkshire. Not that Yorkshire is a big place or anything.

Fast forward a hundred years later, and Betty’s has six tearooms in Yorkshire, the York branch of which being where the SO and I ended up at 9 p.m. on a Friday night on our second date, eating cake and drinking tea. We’re wild, I tell you. And, rather more relevantly, Betty’s is also synonymous with fat rascals. They sell upwards of 375,000 a year and offer both fat rascal gift baskets and cheeky little rascals on their website. Fat rascals are, in fact, their most popular product, despite being decorated with glace cherries. Ew.

Of course, fat rascals are far older than Betty’s and are sometimes referred to as turf cake (I can see why they went with fat rascal). It’s somewhere between a rock cake and a scone and is thought to have its origins with Elizabethan-era bakers who didn’t want to waste leftover bits of dough. They worked the dough up with the then-exotic dried fruit and turned them into flat cakes that were sprinkled with sugar before baking. Even Charles Dickens knew of them, although apparently, they were mostly Yorkshire-specific until the 1980s.

And, history aside, they’re rather delicious and I always liked them at Betty’s. After I’d picked the glace cherries off, of course. More importantly, they are scone-like enough for a dragon’s refined palate and substantial enough to fuel important investigations.

What more can one ask for in one’s baked goods?

Mix flour, baking powder, spices, then chop the chilled butter into pieces and rub it into the flour mix with your fingertips until it gets all breadcrumb-y.

Mix in the sugar, fruit and zest.

Add the egg yolk and around half the milk, then stir until a soft scone-like dough forms (it’ll be a bit sticky, but holds its shape well). Keep adding extra milk to get to the right consistency, but try not to mix the dough too much, as that can make it tough.

Form the dough into round balls just smaller than a tennis ball – you should get at least 12. Brush the tops generously with another whisked egg yolk, or entirely forget about this step, if you’re me. In my defence, I don’t think we have a pastry brush, or I can’t find it, so I have to use my fingers, which is slightly less fancy-feeling.

Allow to cool slightly and serve split with butter, jam and cream for a truly decadent treat!

They don’t keep well, so do your best to eat them all at once (this is easily done if entertaining dragons). I believe they do freeze well, but who wants to risk it?

Over to you, lovely people – do you have a particular food that reminds you of certain places or events? What are they? Tell me your stories below!