Life & How To Cat

In which the Little Furry Muse explains how we should all be more cat. 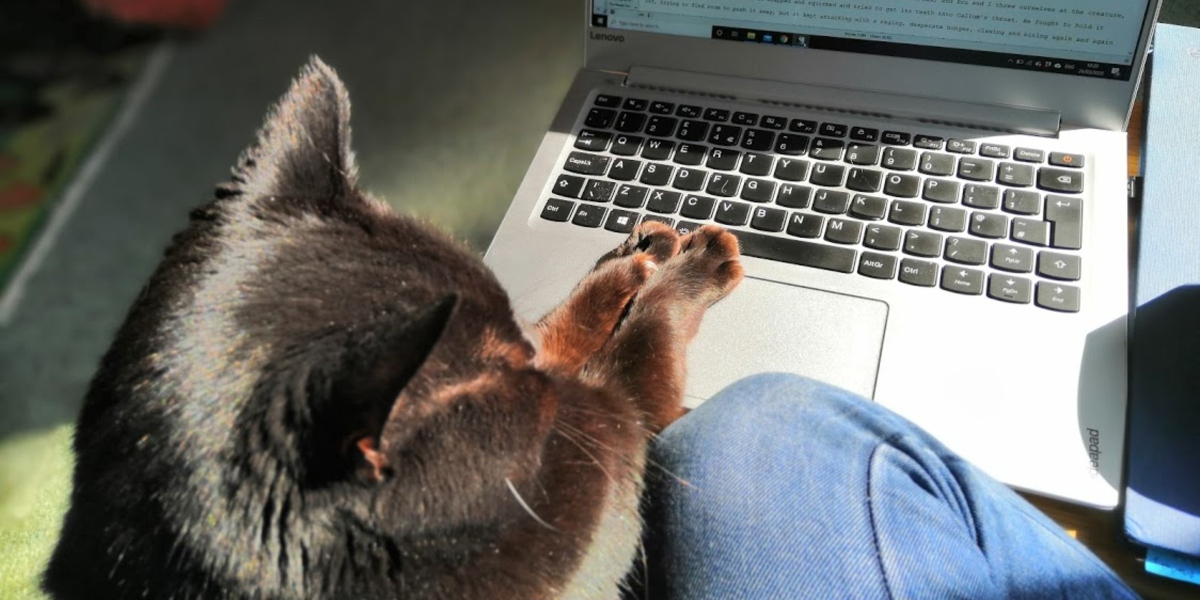 Layla has made her mark on this blog more than once, and she’s insisting that she be given her chance to shine again. Having ladled out life advice for cats and humans alike, she has some observations on human behaviour that she’d like to share with us.

I say humans, but really, it’s just me. She’s judging me. Which is what cats do, but she could be at least a little subtle about it.

Over to the little furry muse.

Are you listening, humans? I have prepared a presentation.

Greetings, inferior beings. I’m going to take this chance to enlighten you on a few things, in the hope that my human will also learn. I don’t hold out much hope, though. She’s terribly slow. (K: HEY!)

It seems to me that you two-leggers do dance around things an awful lot. You call it politeness and courtesy. I call it unnecessary. So let’s get a few things straight.

No self-respecting cat feels social all the time, and if people are going to be pushy, you should feel free to hide under the couch. Or wherever it is you fit, since you’re all a bit over-sized. You get all wound up about being social, but do you do anything about it? No. I went and sat on the roof for half the night when more than the two permitted humans were in the house the other day. The Significant Human kept trying to get me back in, but I wasn’t having any of it. And did she join me when she got tired? Ha! Silly creature.

The roof is a viable option.

2. Respect your boundaries, and make sure others do, too.

I am a cat of advanced years, and before adopting the SH life was a bit rough. This means that I have no patience for fussing. I will allow the SH to pick me up once a day for a brief cuddle, and for the rest she knows to limit things to some petting and head rubs, strictly on my terms, of course. I am not comfortable with more than that, and I make this clear with a some assertive tail sweeps and, if pushed, an admonitory bite. If you don’t listen, on your own head be it. The SH tries to explain this to guests, so it’s really their own fault if they push things.

Observe as I discipline the human for failing to display correct petting etiquette.

The SH, for reasons known only to herself (K: it’s called politeness, Layla), rarely makes a fuss when things don’t go her way. She sighs a bit, but then continues as if nothing is wrong, although I hear her muttering sometimes. She never seems to actually say, “I don’t like that,” even when, for example, there are people being loud outside her window when she’s trying to sleep. This is, of course, entirely her own fault as she sleeps at ridiculous hours, and always at night. Humans. Anyhow, if I were her size, I’d throw cans at them from the window. Or potatoes. I’m not sure what else potatoes are good for.

To demonstrate how you can be more proactive in expressing your displeasure, here are some real-life examples:

If I am bored with my food, I will stop eating until the SH provides a decent alternative.

If she insists on putting that stinking poison (K: flea treatment, Layla. Flea treatment. You don’t want fleas, do you? L: Don’t be vulgar, I never get fleas. K:…) on the back of my neck, I will retire to a high shelf and glare at her for at least two days.

If she buys the wrong sort of sand stuff for my indoor toilet, I will use the bathmat.

And if she will insist on sleeping past 5am and not responding to the gentle touch (K: ha!) of my paws on her face, I will fart on her pillow and leave.

Make your feelings clear, people. How else will you be relaxed enough to sleep all day?

You will not touch me with your poison drops.

4. Bring gifts to those you love.

The SH does her best, as does the Other Human. They can’t help that they will never be as beautiful, gifted and intelligent as cats (K: can I insert a face palm here?). I do love their big clumsy selves, and to show my appreciation I will on occasion bring them a nice mouse, or a lizard. These critters take some catching, and there is usually some bloodshed involved, but I persist and try to always bring them in alive, so my humans can learn a little about hunting. They normally jump around and shout a lot while they try to catch the gifts, so I feel they do understand how special these little gestures are.

However, they’re not very good at reciprocating. They keep bringing me fluffy mice and fake birds, stuffed with herbs. I know the real ones are tricky to catch, but they could at least try. It’s very lazy.

Eh. I suppose if they insist on buying toys, I can use them as pillows.

You don’t sleep enough, particularly during the day. My humans spend all their time out, or rushing around, or tapping on the internet machine, then expect they’ll get enough sleep by lying down in one special room for about seven hours. That is not enough, and besides which everyone knows that night is the time for adventures and playing, not for sleeping. And what’s with the one room? How can you have slept properly if you don’t sleep in every room, every day?

Then there’s the matter of grooming – I never see the humans grooming themselves. They splash water all over the place instead, which I have to supervise closely in case they need rescuing. Worse than kittens.

They also never chuck up hairballs. I know they eat some odd varieties of grass, but it doesn’t seem to work very well. I hate to think of the amount of hair they must have in their tummies.

So, there we go, humans. Please try and emulate cats a little, and your lives will only be the better for it. You can contact me through my human with any questions, or to express adoration and send treats. You’re welcome.

Are we done here?

There you have it. Layla speaks, and I’m not sure all of it was entirely rubbish. What do you think? Kitty behaviours we should embrace or resist?