March Reading – Cloudy with a Chance of Dismemberment

Every now and then, one senses a pattern in one’s reading. A search for meaning… 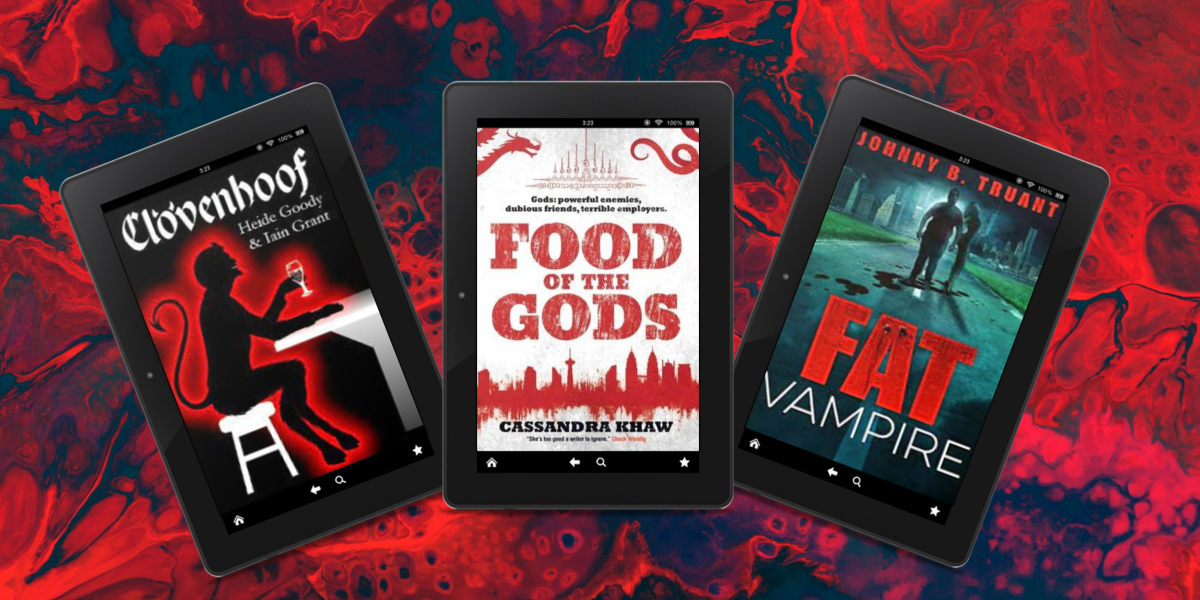 Every now and then, one senses a pattern in one’s reading. A search for meaning, perhaps. A hunger for connection. A desire to learn – about the world, or the inner workings of others, or of our place in a vast and unknown universe.

All three books I’ve read this month (or five, as one was actually three books within a boxset) feature dismemberment. In some it’s sort of a by-the-by dismemberment, kind of a side effect of a vampire story, or of Satan moving in upstairs (although, to be fair, he had nothing to do with the death of the dismembered person in question). In one book it’s kind of a central, recurring feature of the story.

And I’m not sure what that particular pattern means.

I think I might actually put that aside and not look at it too closely. Or call it a revisiting of my teenage years, where I read all the horror, as often as possible.

And, in my defence, the goriest of the books was also the most beautifully written, so, well…

Yeah, I got nothing.

Read on for this month’s cake and a cuppa reviews, then watch the vid for my dawning realisation that yes, I was apparently feeling very bloodthirsty this month…

Food of the Gods, Cassandra Khaw. This is an astonishingly bloody, visceral book. It’s also funny, snarky, and has, in places, a sharp bite of social commentary. On top of that, the writing veers into the poetically beautiful, even while it’s drenched in quantities of guts and gore that’d make a 90’s slasher movie director worry about the fake blood budget.  Our hero, Rupert Wong, seems to have fallen foul of pretty much every god in every pantheon, and, other than an ability to die on demand and plunge to Diyu (Hell), his main skill is preparing gastronomic delights for a mob family of ghouls. So the basis of said delights are, well, human in origin. Um. Beautifully written, potentially a little quease-inducing, somewhat disorientating, and confusing in parts (I thought I’d picked up a book in the middle of the series, as I say in the vid, but now I think I actually haven’t? Not sure), this is definitely my book of the month. But no cake or cookies. It may have put me off cake and cookies, however briefly.

“And for one infinitesimally brief moment, the universe peels open, and I can see everything—how physics and velocity and time intersects with the idea of a heaven above, how meta co-exist with the fundamental truth of their non-existence, how the sun can be a star can be a ball of dung rolled across the galaxy by a gargantuan beetle. Suddenly, it is all so clear.”

― Cassandra Khaw, Food of the Gods

Clovenhoof, Heide Goody & Iain Grant. Considering that this book is about Satan, who, fired from his job as Lord of Hell, has to learn to live in an average apartment with non-supernatural neighbours in a rather uninteresting suburb of Birmingham, as well as negotiating a tricky job market for ex-fallen angels, and the possibility of Relationships, this is definitely the least gory of my month’s books. It’s also a very light, fun read, with much goofiness, some fun social satire, and only one small dismemberment (which was accidental anyway). Plus a slightly gross end to a dinner party, so I think we’ll hold the tea and cake again. Maybe a large glass of something very strong to wash the taste away.

“He had decided that if he ever returned to his old job he would create a special level of hell, an enormous inescapable shop of attractive but useless and overpriced items that the damned would wander for eternity in the cold delusion that this was what they wanted. And then Nerys had taken him to IKEA and Clovenhoof realised the humans had once again beaten him to it.”

Fat Vampire (Books 1-3), Johnny B Truant. This is exactly what I think about when I think of easy reading. Fast, easy, uncomplicated plots and a good sense of humour. They’re neither exceptional nor memorable, but they are an enormous amount of fun. Sort of the Stephanie Plum series with added gore. Reginald is the titular fat vampire, turned accidentally and in the first book sentenced to death as an unsightly blemish on vampire kind. But he’s much, much smarter than the rest of them, and I’m sure will save the entire species by the end of the last book. And this is un-gory enough that I can give it a large box of doughnuts and a super-size shake.

“Reginald could tell by the way she jumped when anyone dropped anything that she wanted her money back for the broken promises of adulthood too.”

And now for the vid – excuse the weird lighting. We had sun!

Now over to you, lovely people. Have you had any sort of pattern in your reading lately? What have you found yourselves reaching for? Let me know in the comments, and happy reading!