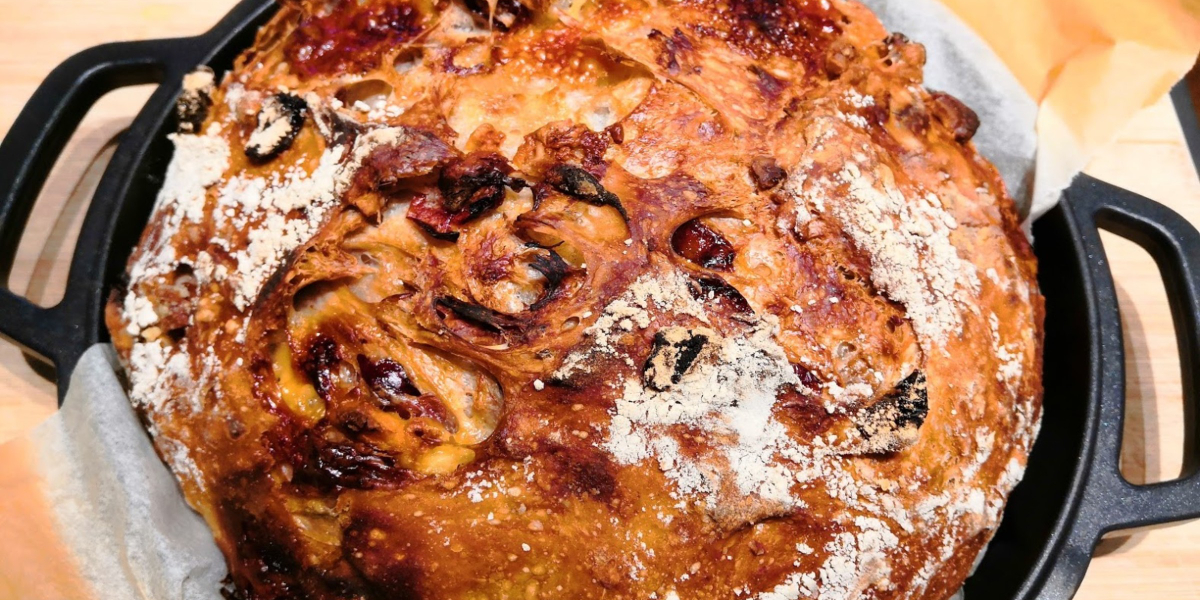 I shall place a disclaimer here and point out that I do know it’s still November, and not technically a time for talking festive foods yet. However, this bread is too good not to eat at the earliest possible opportunity, plus I’ve just spent a week in an absolute chaos of fun recipes for the new Toot Hansell Christmas Collection, which is coming very soon! I actually tried this recipe out a few weeks ago, and it definitely made the cut for the collection. It’s easy, tasty, and stuffed full of flavour.

Perfect for after an attack by renegade water fowl, which is always a risk in Toot Hansell …

Keep an eye on the website or social media for more sneak peaks and updates, and check out the amazing cover below!

I’m not sure at what point cranberry became a Christmas flavour for me. I didn’t grow up with festive turkey dinners (or not until Mum suddenly decided we were a turkey family. I think before that it was more ham or lamb). Cranberry is not a traditionally kiwi thing, really. I still remember encountering cranberry sauce for the first time at an American family’s Christmas party, where it had been pushed out of the can still in a tube shape and sliced. Both my dad and an Australian friend thought it was tinned beetroot, which is a staple at any Kiwi spread. They’d taken half a dozen slices each and, having discovered it was not remotely like beetroot, were wandering around the party trying to foist them off on people, me included.

I declined to help them, because I also would have preferred beetroot.

However, vegetable-based confusion aside, I quite like cranberries. I love making cranberry sauce, and even as a veggie I always try and make some for Christmas dinners. The tartness does glorious things among all those roast potatoes and cauliflower cheeses and stuffings. And while cranberry juice is a bit meh in my mind, dried cranberries are delightful little monsters that go exceptionally well with Wensleydale cheese, which takes me in an effortless segue to bread.

Okay, so, not effortless, but cheese goes with bread, and cranberries go with cheese, so it’s not that much of a stretch.

Look, all I’m saying is that I have a recipe for delectable bread here that’s crammed with dried cranberries and Wensleydale, as well as a good helping of walnuts, because they go with bread and cheese and cranberries too. And it’s an easy bread, because as much as I love baking – and I do – and as much as I love bread – which I really do – baking bread is an entirely other thing.

Look at that gloriousness!

Bread – as in actual, yeasty, magically-rises-due-to-little-yeast-beasts bread is something I’ve only come to recently. And, weirdly, I find sourdough much easier, because the recipe I use is so forgiving that I’ve forgotten it out of the fridge for three times the length it was meant to be out, neglected to fold it when I should, and had complete disasters getting it into the pot (as in only half went in on the first go, and the rest had to be scraped out of the bowl and stuck on after), but it still works. It’s my sort of bread (and if you want to read about my mishaps in sourdough, you can find what worked and what didn’t here).

Regular yeast bread, however … Under-proving. Over-proving. Over-kneading. Under-kneading. Windowpane tests. Strange kneading techniques. And, of course, watching far more Great British Bake-Off than is good for me, and so knowing that things may look great from the outside, but inside all may be squidgy doom.

Gloopy bubbliness. It looks beautifully monstrous, and yet it ends up delicious …

But. But. There is a glorious recipe that solves all these conundrums. No need to worry about feeding a sourdough starter, or waiting three days for your loaf of bread (even if that is strangely satisfying … just me? Okay). No kneading terror, or aching arms. Just pure simplicity.

It is ideal for those too intimidated by Bake Off to enjoy the art of kneading (me), even if Paul Hollywood would probably shake his head at it. However, I defy anyone to taste this glorious version and say it’d be better with a knead.

And if you fancy more no-knead bread in your life, this is based off the original Jim Lahey recipe, as is my cinnamon and raisin bread. And there are many, many wonderful variations out there in the wilds of the internet also.

But this one has cranberries and Wensleydale cheese and walnuts in it, so you know you want to make this one.

You know you want it.

Combine the yeast, warm water and sugar and leave in a warm place until you have a nice foam going.

Combine the activated yeast mix, flour, and salt. Mix well, then add the fruit, cheese, nuts, zest, and rosemary (if using). Mix well enough to make sure everything’s distributed well. It’ll be really claggy and rough-looking, but it’s meant to be, I promise.

Leave in a covered bowl in a warm place for 18 hours (which means, if you’re more organised than me, that you can have it ready to go for breakfast the next day).

Turn your dough onto a floured surface and shape into a rough ball, giving it a smooth-ish top. Transfer the ball onto a sheet of parchment paper and slash the top lightly. Transfer into your heated pot and cover.

Devour with lashings of butter. It is best if you let it mostly cool first, though, as that means it’ll slice without squishing up and getting a doughy texture. This freezes well, so I’d eat it on the day or get it frozen. If you slice it before freezing you can grab a piece and pop it in the toaster any time, and it tastes even better that way, if that’s possible.

A note on Wensleydale: it’s a fairly hard cheese, mild and a little salty. If you can’t find it, though, you can substitute a mild cheddar, or even a feta would be fun for something stronger.

And over to you, lovely people – are you a cranberry fan? What sort of foods shout festive season to you? Let me know below!