Soft shortbread with a punchy ginger topping that is ALL the good things about ginger and none of the bad. 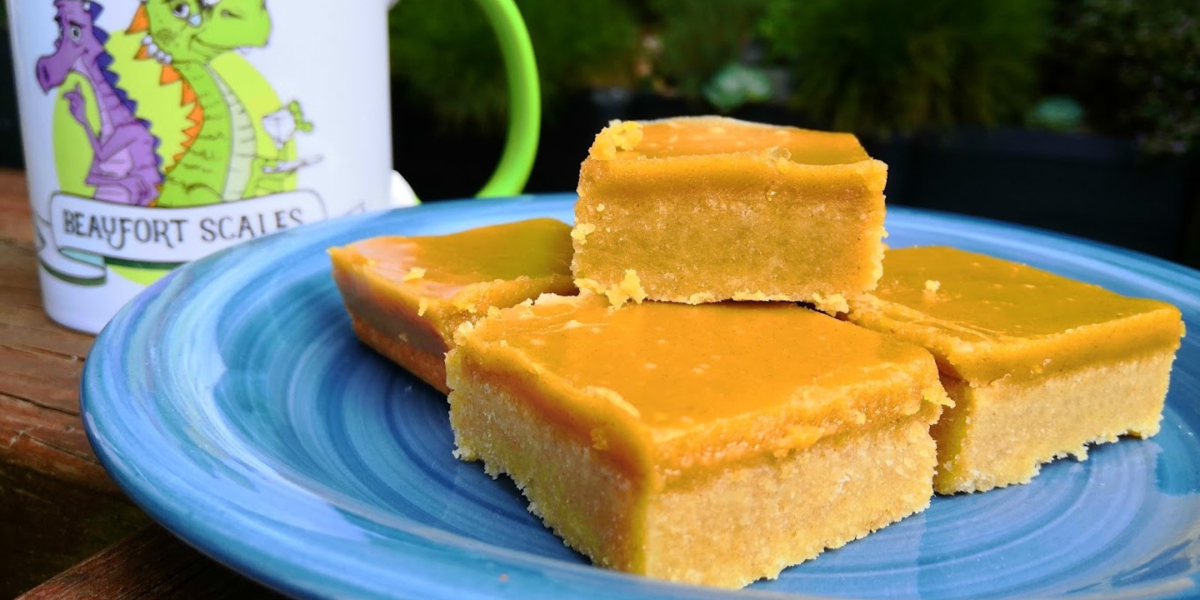 Ginger is, I find, a divisive flavour.

I don’t mean that it’s the sort of thing people fall out over, like the issue over whose mum makes the best Yorkshire puddings (I say the answer depends on who’s making dinner. It’s their mum, obviously, in the interests of a pleasant evening), or what the correct name for a soft white roll is (bap? Cob? Barm cake? Tea cake? Stotty? Scuffler? Oggie – okay, no, now someone’s just making these up), or where a Pavlova comes from (NZ, obviously, not Australia, and I’ll claim that while not even liking Pavlova).

I don’t even mean that it’s like coriander/cilantro, which makes some people want to scrub out their mouths and others (like me) add it to pretty much anything that looks like it might, vaguely, possibly, be related to a dish that could need it (although I have not gone as far as McDonalds …).

No. What. And is that DRIED coriander? STOP.

No, I just mean divisive as in I like it, but also I really don’t like it.

Ginger biscuits? Not bad at all.

A good spoonful of grated or finely chopped fresh ginger in a stir-fry or curry? Absolutely.

A nice pinch of the dried stuff in a crumble topping? Ooh, please.

Pickled ginger? Um. No. I’ll just leave it on the side, thanks.

Big chunks of coarsely chopped ginger drowning the taste of that lovely stir-fry? Please no.

Crystallised ginger? Why? Why would you do this?

So I think that basically comes out as yes, flavour enhancer and spice-adder, yum. Actual ginger chunks? No. Take it away please, and bring me some coriander.

Which means it’s a little odd that I adore the classic Kiwi ginger slice. They used to be in every bakery (and still are in some), great generous slabs of softly spiced shortbread slathered with a thick layer of caramel-style icing spiked with so much dried ginger that it’s like a delightfully warm hug in every bite. They are unashamedly, brazenly ginger, sweet and spicy and a little crunchy, just for the fun of it.

I also feel they would be dragon-approved, with all that spice going on.

And so of course I had to make some, and I can honestly say that the homemade ones are even better than the shop bought ones, and I ate two pieces before the icing had even set properly.

“Oh, I’ll take a nice photo of it still in the tray!” Yes, with my finger-sized dent in the middle from impatiently checking if it was set or not …

Preheat your oven to 180C / 350F, and grease a brownie-size tin (roughly 20cm / 8 inch square, although I only had a rectangular one and it worked just fine).

Start with your base – cream butter and sugar with your pinch of salt and splash of vanilla. Get it nice and thick and creamy, but don’t worry about a bit of sugary texture left (essentially I have no patience).

Fold in remaining ingredients, and press firmly into the base of your pan. It’s going to be super-crumbly, but it’s meant to be – you’re basically making shortbread here. Once pressed in well, though, you should end up with a nice smooth top you can level with the back of a spoon. Stab it mercilessly with a fork, then bake for around 25 minutes, or until a nice golden brown.

Towards the end of the baking time (don’t stress about hitting it exactly – this is all pretty forgiving, as suits my ‘creative’ baking style. You just want the base to still be pretty hot), chuck all your icing ingredients in a saucepan together. Pop it over a low heat, stirring regularly until the butter’s melted and it’s all nice and gloopy and pourable.

Spread your icing evenly over your still-hot base in its pan, and leave to set. Once cold or (if you’re impatient like me) mostly cool and fully set, then slice into portions to suit your sweet tooth and settle in with a cuppa.

* Kiwi as in it comes from New Zealand. No flightless birds or kiwifruit were harmed in the making of this recipe.

** I looked up golden syrup substitutes, as I know some of you do not have access to the glory that is golden syrup. I thought it’d just be ‘melt some soft brown sugar’, but apparently not. Corn syrup seems like it shares the most properties with it, although the flavour will be a little different. Honey or maple syrup could also be used, but I’m not sure they’ll set up the same, and, again, it’ll be a different flavour. I’d be tempted to go with half corn syrup, half soft dark brown sugar by weight, and just heat that up with the butter until it’s all melted before adding the icing sugar and the ginger.

*** I realise I have no third asterisk up there, but I’m on a roll now. This is a pretty adaptable recipe. Skip the ginger and use nutmeg and lemon zest in the base, then go with your light corn syrup and more lemon zest in the icing, and sprinkle some toasted desiccated coconut over the icing before it sets. Add some toasted nuts. Add cinnamon and nutmeg, and drop the ginger down. Skip spices altogether and either do it plain, or with some melted chocolate added on top of the icing for a cheat’s Millionaire Shortbread. I’m sure there are other possibilities too – substitute fearlessly!

Now over to you, lovely people! What food feuds (such as Pavlova) do you have in your area? And what foods do you have divided opinions about? Let me know below!