I mean, I say weekend brunch, but given that things are, you know, stuff… 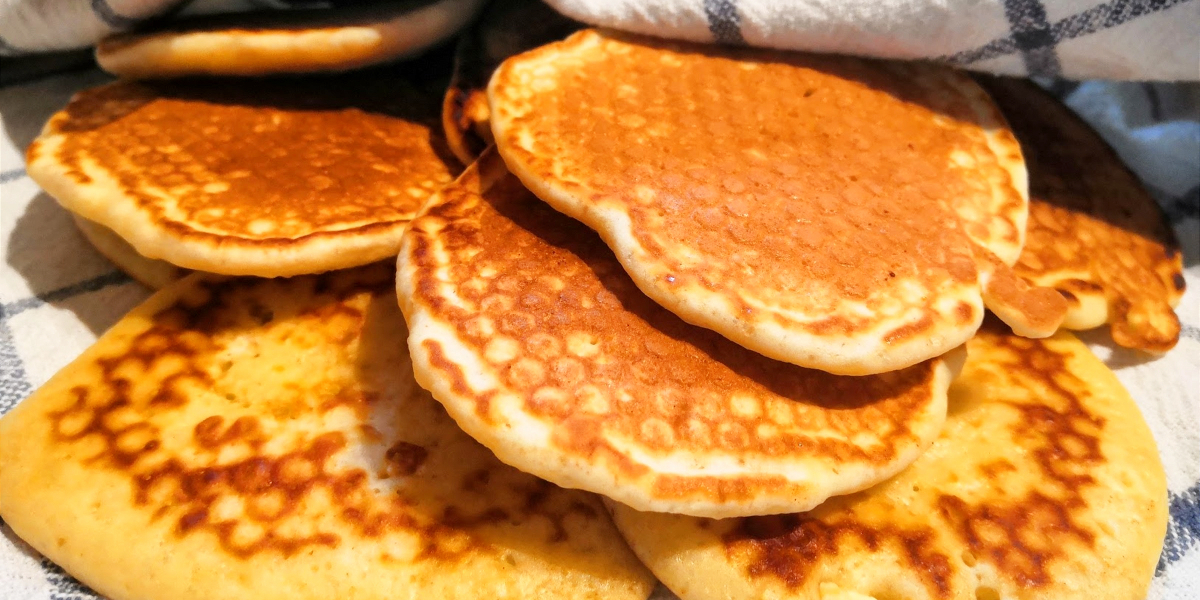 I mean, I say weekend brunch, but given that things are, you know, stuff… *waves vaguely* Given all that, I see no reason why these might not be for a Monday breakfast. Or Thursday lunch. Tuesday dinner, even. I mean, they’re basically chubby crepes, and those are totally an anytime meal option.

So, pikelets. As with many things I remember from my NZ childhood, it appears pikelets are not the same thing everywhere in the world. Apparently in the UK they’re flat crumpets, which I find vaguely distressing. The glory of crumpets (and I love crumpets), is that they are delightfully high towers full of nooks and crannies and tunnels to catch the copious quantities of butter that it’s compulsory to smother them in. So the idea of a flat crumpet just seems, well … pointless. Plus that particular version of pikelet has yeast in it, which is far too faffy for casual, happy, eat-any-time pikelets.

In addition, it seems pikelets are known as drop scones in some areas, which is deeply confusing, as this seems an insult to both scones and the pancake-style pikelets I know and love. Worst of both possible worlds there, I’d say. Although, both scones and pikelets are exceptional with jam, so there’s that.

Finally, a pikelet is also a baby pike, which is a toothy fish that I always imagined living in moats and chomping on intruders’ legs (this may have been something I learned from a book as a small thing. It seems familiar). And, while I love the idea of schools of pikelets living among the reeds in the local tarn (I’m picturing them as pancakes with fins and gills, basically), I doubt they’d be much good with jam.

I am not for the eating with jam, human.

Which brings me to NZ pikelets, which, in my extensive eating experience, have nothing to do with yeast, scones, or fish. They’re basically an adorably tasty, two-bite-size pancake, light and fluffy and just waiting to be dolloped with jam or drenched in golden syrup or smothered in a sprinkling of sugar and a generous squeeze of lemon juice. They’re simple and fast to make, indulgent enough for a weekend brunch and un-sweet enough for dinner on those nights when you just can’t. Whenever I have them I remember being a wee small thing on the boat, when we used to have them for weekend breakfasts. I’d already be in my togs (swimsuit), and would devour my portion with melted butter and golden syrup dripping all over my hands, then immediately jump over the side for a swim. Easy clean up, really.

And while I didn’t go for a swim after making these on the weekend (it’s March in North Yorkshire. And you never know where those baby pike are hiding), they were every bit as delightful as they ever have been.

And I give you full permission to have them for dinner. Why not?

Sift together the flour, baking powder and salt.

Whisk the egg with the sugar until frothy – I use about half the amount of sugar, so 25g / 2 Tbsp, but adjust as you prefer. You can even leave it out entirely and pop savoury toppings on instead.

Add the milk to the egg mix, then the dry ingredients. Mix until just combined – you want a thick but pourable consistency without being too runny, so you may need to add a little more milk to get it where you want it.

Heat a frying pan over medium heat. Grease with a little butter by wiping it on with a paper towel. Spoon your mix into the pan to the size you prefer – I usually go for small-ish ones of about 7 cm or so in diameter. Cook until little bubbles form and pop on the top, which will start to lose its raw look. Flip over and brown the other side.

Eat immediately while standing over the stove, or, if you have excellent self-control and/or someone else in the room, tuck them into a clean tea towel on a plate or rack to keep warm until you get to the table.

This was less an arty shot of a pikelet and more an “I’m not letting them go cold while I take photos” shot.

Over to you, lovely people – do you have any childhood breakfasts you still eat? What’s your favourite for an indulgent brunch? Let me know below!