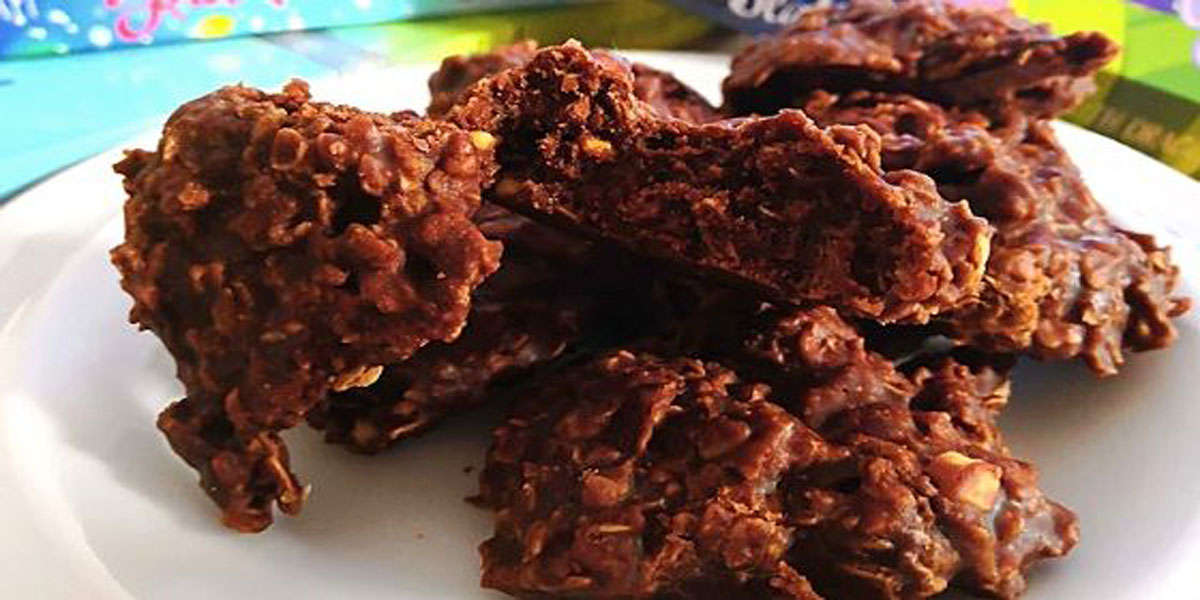 Do you have a particular recipe that’s your go-to when you need a quick chocolate fix, lovely people? Something fast and easy that you don’t need any fancy ingredients for, that you can slap together in the ten minutes before you collapse on the sofa on a Sunday afternoon?

If no, try this one.

When I was a wee small thing and living on the boat, we couldn’t exactly nip down the shop to grab a packet of biscuits when we fancied something sweet. I mean, if you were in a port that happened to have a town I guess you could, but they tended to be expensive, often stale, and if there was any chocolate involved it had long ago melted and welded the biscuits to both each other and the packaging. Unless it was still in a liquid state, which was fun for me but not so much for my mum, who did all the washing by hand.

Anyhow, this particular situation meant Mum made a lot of cakes, which pretty much sorted out the sweet cravings. But cakes take time, and when you’re in the tropics having the oven running in a little galley is less than ideal. So when a wee small friend of my own age said she made these, Mum was obviously pretty happy. She finally got a break from making cakes, and Dad and I got our sweet fix, all in one fell swoop! (And yes, there were some burnt fingers. There still are, occasionally. But that’s cooking.)

The actual name of these biscuits is lost in history, although I have a feeling it was Moose Turds. Which means that, for once, Dad’s new name was less weird than the original. And maybe more appetising. I think. Someone also told me that they knew them as Chocolate Oatmeal Drops, but, yawn. I think I’ll stick with our name.

So, here we go. Porridge Cakes, which come with a side-helping (for me) of the memory of sitting at anchor in the lagoon at Malololailai in Fiji, the water turquoise and the sun hot, all three of us reading, and Dad and I gobbling Porridge Cakes, each determined that the other shouldn’t get more than their fair share.

I absolutely know where my sweet tooth came from, I can tell you.

Porridge cakes can become a bit more tropical by swapping out about a third of the oats for desiccated coconut. I’ve also used unsweetened muesli in a pinch, which was interesting – the addition of the fruit and nuts was nice, the soggy-fied cornflakes less so.

In my vegan days I used (and still sometimes use) soy milk and non-dairy spread instead of milk and butter. Using gluten-free rolled oats and cocoa powder should make no difference to the recipe either, but using sugar alternatives such as syrups means you’ll likely have some issues with setting. And I shall sigh in your general direction, as this is a sugar-hit recipe.

The peanut butter is completely optional, and I only put it in when I fancy it. The mix sets way quicker with it in, though, so be warned! I also tend to half the recipe, which makes it easier to get out of the pan before it sticks, and still makes around 15 little blobs.

I’ve done everything in imperial measures because that was what we used when I was a wee small thing, and I made them so many times I never look at a recipe now. But conversions are there too, for if you’re used to my usual units.

3 cups/270gm rolled oats (quick cooking ones, otherwise this will no longer be a quick recipe)

Chuck everything except the rolled oats and the peanut butter in a big saucepan. Heat up slowly until the butter and sugar have melted together, then crank the heat up and get it boiling. Boil for about 5 minutes while stirring constantly – this is a good chance to get some witchy cackling in. The consistency should get all lava-like and gloopy, and may take more or less time to get there. It’s not an exact science.

Throw in your peanut butter (if using) and mix wildly. Add the oats and mix with even more enthusiasm, then dollop spoonfuls onto waxed paper or buttered baking trays. Work quickly, as they should be starting to set – although adding a dollop more milk and mixing again will soften the mix if it’s getting too hard. Sometimes they come out a bit soft, but pop them in the fridge and they should set.

Allow to cool for as long as you can stand it, then dig in!

And that is my very non-Women’s Institute-approved, deliciously chocolatey quick sugar fix. Let me know your quick fix go-tos below!

Want more chocolate? Try my brownie recipe – it takes a bit longer, but it is glorious! Or if it’s cookies you’re after, you could try peanut butter ones, or cranberry and pistachio…