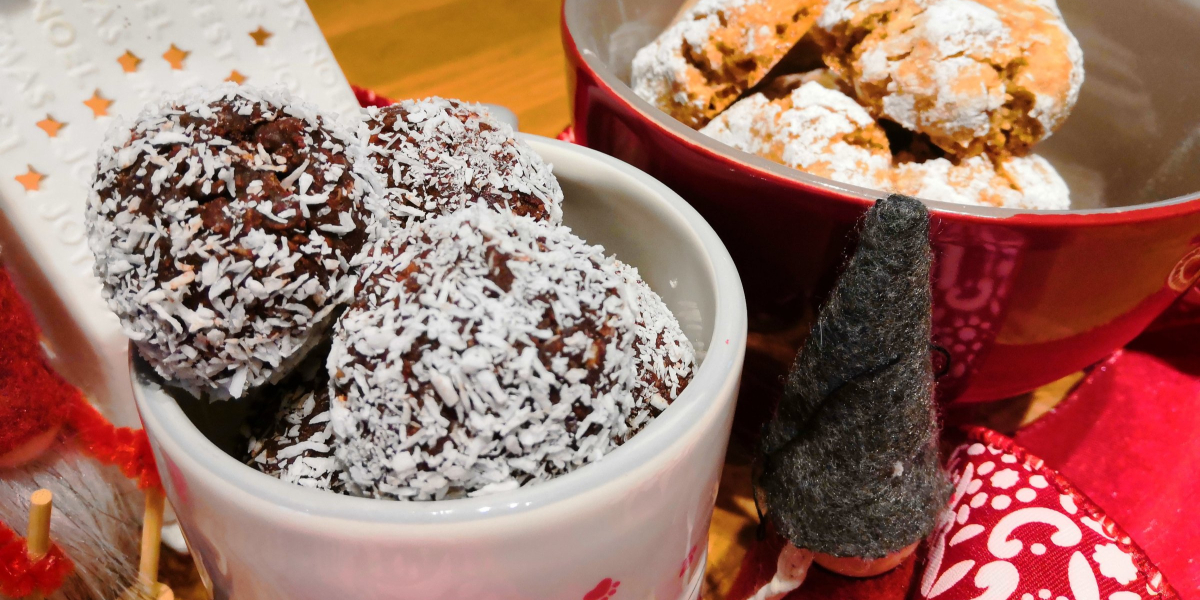 Christmas. Gift-giving season. This used to stress me out far too much. I’m not one of those people who are really good at presents, and just somehow know what someone will love. I have moments of inspiration, but it generally only involves very goofy things like knitted shark slippers or paintable plaster dragons. When it comes to actual, well-thought-out, I’ve-been-thinking-about-this-since-March presents, I have no idea. Even if I have been thinking about it since March.

But a few years ago I realised that, for the most part, none of my friends really needed anything. And they were much better at shopping for things they actually want than I am at shopping for them (although I maintain that everyone needs knitted shark slippers and paintable plaster dragons, they just don’t know it yet). So I decided I needed a new approach, and after some thought realised that if tea isn’t the answer to everything, baked goods certainly are. Or baked goods and tea, in conjunction. That’s possible too.

Also, this meant I only needed to buy some extra bits at the supermarket and therefore had no need to brave the Christmas high street, which filled me with horror even before Covid came around. Food presents for the win, lovely people.

And these lovely treats are pretty much ideal – they’re easy to make, are best made ahead of time to let the flavours mature, keep really well in the freezer (well, depending on how much self control you have), can happily spend time at room temperature unless it’s a hot summer Christmas, can be adapted easily, and look very festive in a nice jar with a bit of ribbon around it. Which is also helpful for thinning out my jar hoard. More wins!

You may also remember these truffles from Rose’s short story last week – both the recipe below and the story can be found in A Toot Hansell Christmas Cracker, which is out this week! So you could gift some lucky person chocolatey deliciousness and a book, if you wanted. Or gift yourself. We deserve all the treats this year. All the treats.

When I was a very small thing, my mum used to make these truffles every Christmas. Well, not these exactly, but as close as I’ve been able to recreate. I was never allowed more than one, as, like Rose, she firmly believed one could not make truffles without rum, and they were therefore distinctly boozy. As was my grandmother’s trifle, which I was also only allowed a small serving of. I mean, officially. As a small quiet child with a very sweet tooth, I’m sure I sneakily partook of far more than my allowed portion.

Now I think about it, it’s possible they both knew how to get the smaller Christmas guests to bed early …

However, being a grown-up now (or so I’m told), I get to make my truffles exactly how I want, which in my case is non-alcoholic. And this means I can eat many of them. Many.

I tend to use coffee in place of rum, as the flavour really compliments the mix. But I’ve also used orange juice, and see no reason why chai tea or whisky or anything else that takes your fancy wouldn’t work. This is actually a really flexible recipe – you could change the raisins and rum for mincemeat (there’s a recipe for that later in the book), or use dried apricots and almond liqueur, or dates and coffee, or … well, the possibilities are endless. Or at least only limited by the bounds of dried fruit. And you could swap the coconut for chopped pistachios or other nuts, too. So many options!

I have yet to perfect a decent non-alcoholic trifle, though. I’m starting to think that without the sherry, it’s just a very wet, stodgy pudding. Sorry, Nana.

Marinate the raisins in the rum for about an hour.

Crush the biscuits, either in a food processor or by hand, until they’re down to reasonably fine crumbs (you can fortify yourself during this strenuous activity by eating the leftover biscuits from the packet). Mix the coconut in.

Melt the chocolate, brown sugar, cream, and golden syrup in a heavy-bottomed saucepan over a low heat, stirring gently now and then. Don’t overheat it, and don’t worry about getting it too smooth – there’ll be some sugar crystals remaining, but you won’t notice them once everything else is in.

Add the chocolate mix and the raisin mix to the biscuits and coconut, and stir well to combine. Then refrigerate until it’s still soft enough to handle, but firm enough to roll into balls (I never time this right. I usually end up hacking bits off and warming them in my hands until they’re rollable).

Roll roughly tablespoon-sized scoops into balls, then roll in the extra coconut to coat. This is messy. Enjoy it.

Pop in the freezer to set and store – the flavours blend and mellow, so try and make them at least a week ahead of when you’re planning to need them. They make great gifts – they don’t melt, just soften a little, so you can put some in a jar and festoon with pretty ribbons, and it’ll be fine to take to a friend’s house. That is, if you haven’t eaten them all. It’s amazing how often I find myself in the freezer once I’ve made a batch …

Makes … well, 30-ish. It depends how big you roll them and how often you check the mix.

Now over to you, lovely people! Do you make gifts, edible or otherwise? If so, what do you make? Let me know in the comments!

And if you fancy getting your paws on the brand new Toot Hansell Christmas collection, you can grab it in ebook or paperback from all your favourite retailers!

A plague of irate water fowl.

And ten ladies of a certain age who are by no means the least troublesome of Toot Hansell’s residents, as far as Detective Inspector Adams is concerned. She’s entirely certain her training never covered dealing with the Women’s Institute, dragons, or festive magic spills.

Not to mention invisible dogs with caffeine dependencies.

But Christmas is almost here. Things can’t go too wrong … can they?

Well. It is Toot Hansell …

Get some dragons in your Christmas with this collection of twelve short stories from the world of the Beaufort Scales mysteries, plus twelve festive recipes!