Delightfully easy to make. Quick to cook. Perfect for a Sunday treat, but… 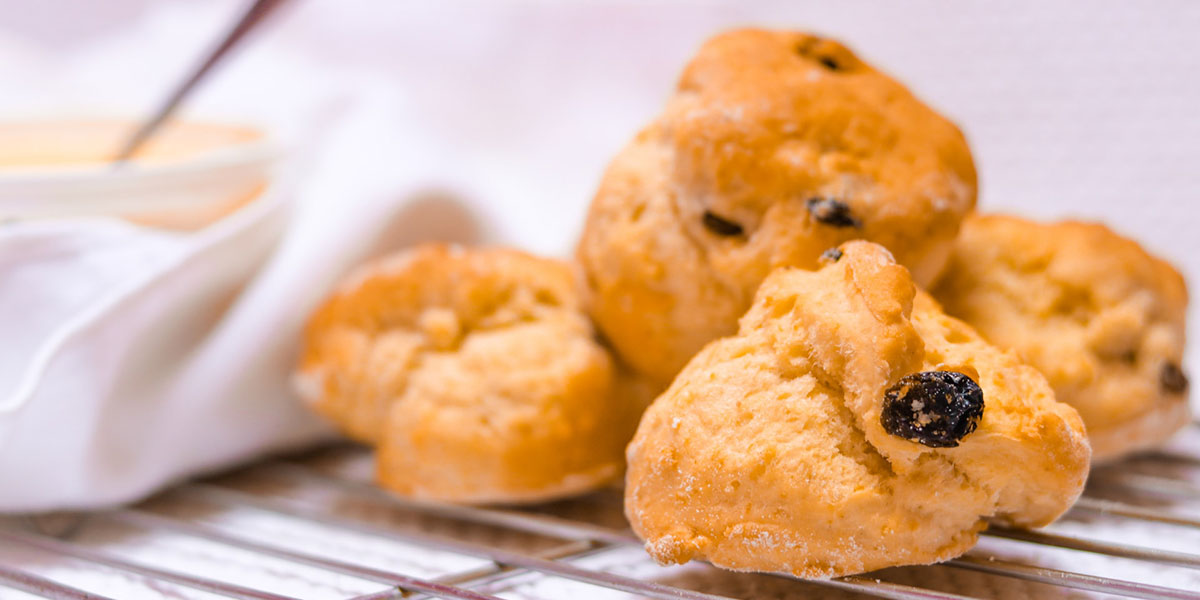 Scones. Glorious little pillows of fluffiness, crowned with jam and (if you’re feeling decadent) a healthy dollop of clotted cream. Delightfully easy to make. Quick to cook. Perfect for a Sunday treat, but always make extra, because nothing brightens up a new week like leftover scones for breakfast.

I can’t remember when I became such a fan of scones – I don’t recall that Mum made them much (Dad and I were big on chocolate, so baked treats tended to run more to chocolate cake or, or occasion, cookies). Rocky Bay Nana made rock cakes, and white bread sandwiches filled with butter and hundreds and thousands. Cuppa Tea Nana made shortbread (she was Scottish, hence the tea and shortbread). I don’t think I had the pleasure of a good, tasty scone until I was an adult, in the UK. I mean, we had scones in NZ, but they were the kind of boring, dry discs that got left behind at any pot luck dinner. They certainly never had cream on them. Cheese, sometimes. I remember cheese scones being popular. I also remember them being very salty and having that weird bicarb aftertaste that makes your teeth feel fuzzy.

But that was before I started making my own scones, for some odd reason. It was when I was working on a sailing catamaran in the Caribbean, and I’m not at all sure why I decided it was necessary to make scones. I don’t think you’d exactly class them as island fare. But anyhow – when I think back it’s that sense of being straight out of the water, grabbing a scone warm from the oven and splitting it in two, revealing the softly yellow, still-steaming insides. The butter melts as you spread it, and then you load up with jam, salt and sweet mixing on your fingers. Decadence. And that’s even before you think about the glorious possibility of clotted cream. (In retrospect, I wouldn’t have been the one in the water, as I’d have been cooking. And I probably wouldn’t have had a warm scone, because I’d have been saving them all for the guests. But still – it’s a nice thought…)

So you’d think my immediate connection to scones would be blue skies and salt water. However, my mind seems to have linked them quite inextricably with a certain version of England – one that involves fetes held on neat village greens circled by flower-festooned stone cottages. There are probably dogs of the golden retriever and Labrador variety in evidence, and quite likely bunting. It may rain later, but that’s okay, because wellies are quite the favoured footwear. There’s that peculiarly wonderful quality of sunshine that only England’s brief summer seems to achieve, and the smell of crushed grass and farmland. That’s what scones make me think of. And I do get a little fixated on them whenever we’re back in the UK. The trip to Edinburgh comes to mind, when I had a scone for breakfast every day. I would have tried the same thing when we were in the South of England last October, but we were there for a lot longer, and even I had to admit that scones for breakfast every day for two weeks might be a wee bit excessive. A wee bit.

Scones are also heavily favoured by Beaufort Scales, High Lord of the Cloverly Dragons (Mortimer, on the other hand, has a terrible weakness for mince pies). One might ask how a dragon came to develop such a taste for scones, and the blame for that would have to lie with the Toot Hansell Women’s Institute, or, more specifically, Miriam. Although Miriam does have a preference for substitution in her recipes, and chickpea flour scones are not quite the same. They are, however, still very tasty, and Beaufort is not known to be picky when it comes to baked goods. He even enjoys Jasmine’s pies, which the rest of the WI (and the village) tend to avoid in case they come with a side helping of salmonella.

Beaufort and Mortimer are, in fact, champions of good (or even dubious) baking. After all, dragon fire can melt glass. It’s not ideal for scones.
But we’re all rather fond of this recipe.

Pre-heat oven to 200C. It needs to hold this temperature, so an oven is recommended, unless you have a very well-practised dragon helping you out.

Combine flour, baking powder and caster sugar in a large bowl, then rub the butter in until the mix resembles breadcrumbs, with no large pieces of butter left (you can use knives to do this, or one of those fancy butter-rubbing things, but I quite like just getting my hands in there. Wash them first, though. Especially if you have talons and scales).

Combine eggs and milk, then add to the dry ingredients, mixing gently with a knife or wooden spoon. You’ll probably need to get your hands in there again by the end, and add the sultanas before bringing the dough into a cohesive ball (you may need to allow for extra sultanas. They’re very more-ish, and oddly tempting for dragons).

Tip out onto a floured board or work surface, and knead very lightly to bring everything together. Pat down to a circle if you want wedges, or a rough square (ask the dragons not to breath on it, as we don’t want the cooking to start too soon). Cut into 8 wedges or 9 squares, and pop onto a baking tray, making sure the bottoms on the scones are well-dusted with flour to prevent sticking. You can brush the tops with milk or beaten egg yolk, but I usually forget.

Bake for 10 minutes, or until tops are lightly golden and scones sound hollow when tapped on the bottom (do not tap your friendly dragons on the bottom. No one needs a startled dragon in the kitchen).

Eat while still warm, and before the dragons nab them all.

Makes 9, or not enough for hungry dragons.

Looking for more dragonish recipes? How about Dragon Soup?

And now, how about you, lovely people? Are you ever inspired to cook after reading about meals in books? Do you like scones? What’s your favourite traditional baked treat? And do you share them with dragons? Let me know below!

(Edit: as Baking Bad, Beaufort’s first cosy (and scone-cluttered) mystery has, of course, been out for a while now, you can grab your copy in ebooks, audio, and paperback from all your favourite retailers here!)