A quick and easy carrot loaf cake that’s perfect for an everyday treat – or an Easter one. 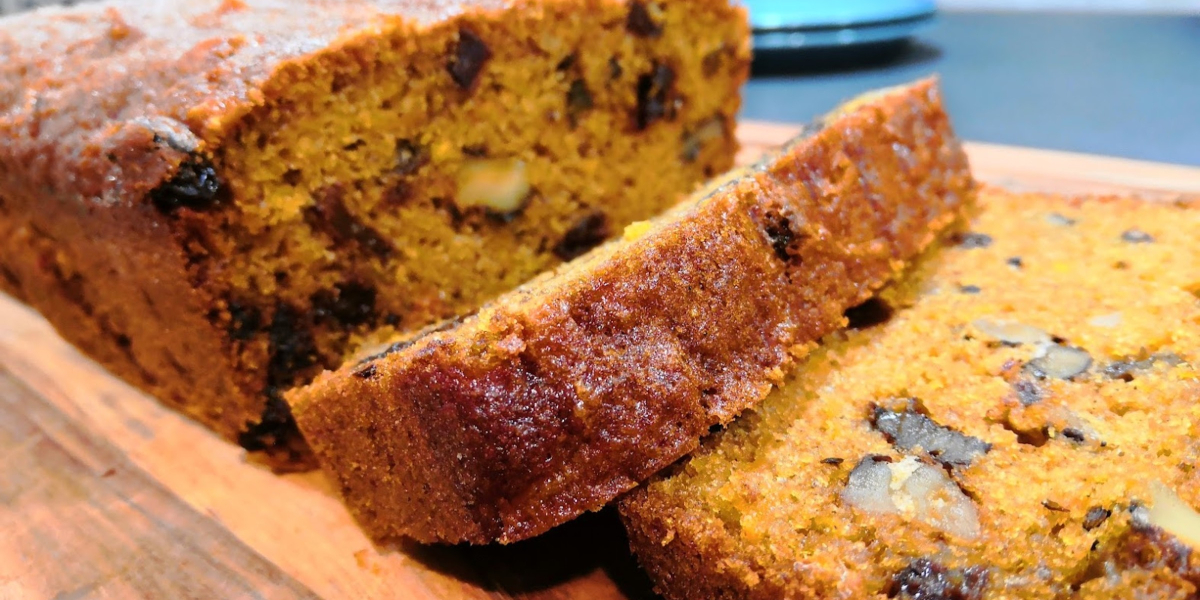 I think my main problem with Easter foods is that, by the time it actually gets to Easter, I’ve already eaten as many hot cross buns as I can possibly manage in one year, so am distinctly disinclined to make more. Especially as the bought ones (plain, old-fashioned ones with raisins in them, toasted and buttered. None of these fancy types with chocolate, or peanut butter, or masala and chilli, or lemon and white chocolate, or cheddar cheese and caramelised onion – these are real flavours. I’m not making these up) are just as I want my hot cross buns to be, really.

I have made hot cross buns before. Once I used a very complicated Paul Hollywood recipe, which required three rises and two days (and weren’t even sourdough, which I could’ve forgiven the two days for), and they tasted very much like polystyrene. The other time I tried, I mashed up two recipes and they were glorious, but I didn’t write down what I did and now can’t remember what two recipes I used. So I’m not sure that success rate is worth the effort when, like I say, I really just like basic supermarket hot cross buns, heathen that I am.

As for other Easter foods … well, eggs and hot cross buns are sort of the extent of things for me, since I don’t celebrate. And I tend to use my Valentine’s technique for eggs, in that I wait until after the weekend to pick up some half-price chocolate. Which means I’ve never given Easter baking an awful lot of thought.

However, I did fancy making a cake this week, and it seemed very reasonable, given the timing, that it be an Easter cake. So off I wandered into the wilds of the internet for some suggestions.

And there were many, from which two key themes emerged. Firstly, I had no idea that cheesecake is apparently an Easter staple? Is that a thing? I mean, cheesecake is nice, but every second cake on the Easter baking lists was cheesecake, which seemed excessive.

Also fancy, and I did not want fancy cake.

The other theme is cakes and cupcakes and brownies crowned with Easter eggs. Lots of Easter eggs. And those marshmallow chickens. And, I mean, I get that it’s a great excuse for extra chocolate consumption, which I will never argue with, but wow. Wow. Even my exceptionally sweet sweet tooth was hurting at the sight of those.

So those were also a no.

But then I spotted a carrot cake, and thought, of course! Easter bunny = carrot cake. Perfect!

Only carrot cake with cream cheese icing is, if not fancy, at least super-rich, and again – not what I wanted. I like that sort of cake on occasion, probably while out at a nice cafe where you can have a slice with a cuppa and experience that weird mix of feeling both delighted and faintly sick that only really rich cake gives you. It’s not the sort of cake you want a whole tin full of at home.

But, once upon a time in a previous life, I used to make a carrot quick bread for serving with breakfast on a charter yacht. It was sweet and tasty enough to stand on its own, no icing needed, and yet not so rich and claggy that you couldn’t happily go back for a second (or third) slice.

Or course, there was no way I remembered the recipe, and I have no idea where I got it from in the first place, so instead I poked around a few recipes, mashed them up, and came up with this. It’s fast, easy, and packed with spicy tasty goodness and nuts and dried fruit and such yumminess.

And it’s very much not fancy.

Pre-heat oven to 180C / 350F. Line a loaf pan with parchment paper (or decide to just grease and flour it, like I did, then kick yourself when you leave half the cake behind in the tin …)

Mix the flour, raising agents, and spices in a small bowl and set aside. Give your eggs a light whisk with the oil, then add the brown sugar and give it another wee mix. Do the same with the yoghurt and vanilla (just mix enough to combine, not to do anything fancy).

Chuck your grated carrots and additional bits into the wet ingredients, fold through, then add the dry ingredients and fold gently until all combined.

Tip into tin and bake until a toothpick stuck in the centre comes out clean – about an hour, probably. You may want to cover the top of the cake for the last 15 minutes or so if it’s browning up too much.

Cool, and eat as is, or you could give it a quick slap of lemony icing to fancy it up a bit. Or to stick the bottom back on, which is what I’d do if I was serving to anyone who I thought might mind their slice coming in two pieces …

Now over to you, lovely people – do you have anything in particular you bake at Easter? And what’s your guilty I prefer the shop-bought stuff pleasure? Let me know below!