For years now, I’ve not really been of the opinion that we need a writing space… 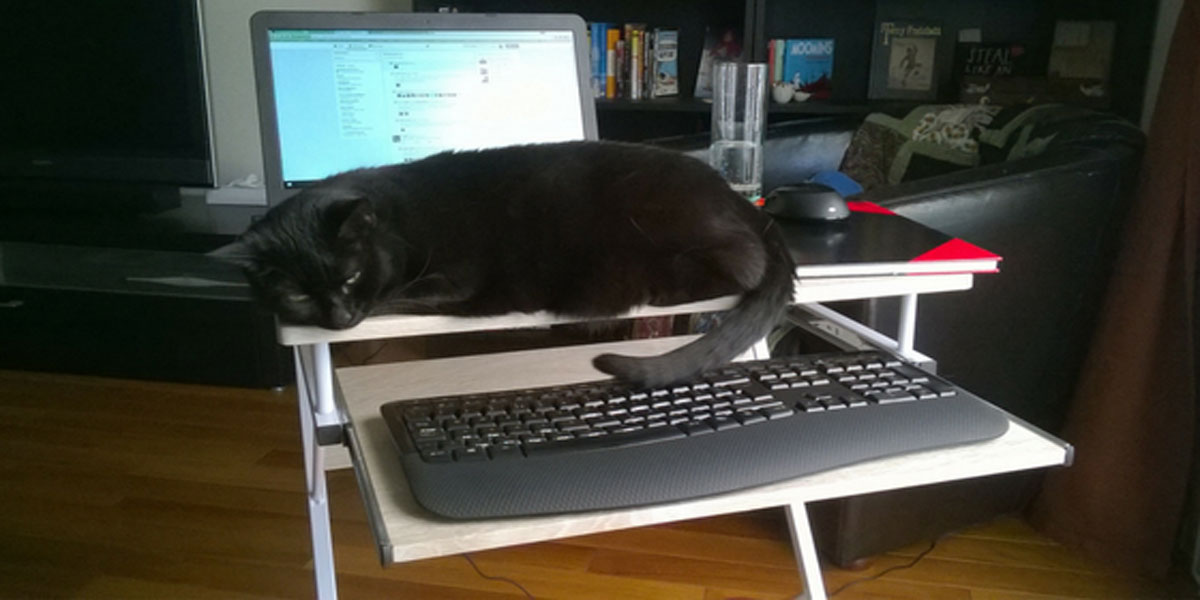 For years now, I’ve not really been of the opinion that we need a writing space. I mean, it’s nice, sure. And if you live with other people, you definitely need to be able to shut the door on them and get on with your stuff with minimal interruptions. But a dedicated writing space? That’s kind of a luxury.

Part of this attitude may be that I have a complicated relationship with chairs. I mean, they’re very nice and all, but I’m not very good at sitting in them. Not in the way they’re meant to be sat in. So any desk chair has to accommodate me sitting with one or both legs folded under me, and most desk chairs are a bit too constrictive for that. Plus I’m not used to sitting, so my back gets sore. I did try the whole balance ball thing, but not only can you definitely not sit cross-legged on top of one, the Little Furry Muse was pretty sure it was The Creature Bringing The End Of The World, and would barely countenance being in the same apartment as it, let alone room. And having a desk with no chair kind of ruins the point.

Notebooks make excellent beds. Much better than an *actual* bed.

I’ve written a lot while sat on the floor. When I started out on this writing thing in a serious manner, I’d just sold my little bookshop in Australia, and we’d had to move out of our rented apartment because it had sold. We only had a month or so left, so we were living in a cabin on a campsite in Montville, which is in the Sunshine Coast Hinterland. It was a nice enough place – a tiny town with a bakery and a pub and not much else, and beautiful views out to the coast in the distance. The cabin had a reasonable kitchen, and a surprisingly big bathroom, and a lounge and bed all in one room. What it did not have was any sort of table or coffee table. Looking back, that was kind of weird. There was room for a table in the kitchen, definitely, but there wasn’t one. We don’t really eat at tables (see aforementioned issues with chairs), so it never bothered us, but for some people it must have been at least a little bit of an oversight. So I wrote sat on the floor, with one of those breakfast trays with legs over my lap, and the cat trying to fit on as well.

Then we went to New Zealand and took a camper from the South Island to the North. Admittedly, I spent most of the time taking photos and clambering around hiking tracks, but when I did write, it was tucked into a corner of the camper, with my notebook on my lap.

After that we did a yacht delivery with my dad. The best writing place there was curled into a corner of the cockpit, with my notebook once again on my lap.

Coffee tables have the added advantage of floor space being available for planning purposes.

Then it was England for Christmas, and there was a table, but it was downstairs and upstairs was warmer, so I wrote either on the floor at the coffee table, or – you guessed it – on the couch with my notebook on my lap.

And so on. Since we got to France we’ve moved three times, and each rented place has been a mix of sitting on the floor, or using a tiny little rolly desk that was very practical but so wobbly that I thought my typing might actually send it shaking to pieces. I did discover that standing at the kitchen counter (with the laptop on a mini ironing board from IKEA, which is the only use for an ironing board, in my opinion) was really good for my back, and useful for everything except actual writing, so I started alternating between that and sitting on the couch with the Little Furry Muse (she does not approve of me standing. There are less lap opportunities), or on the floor surrounded by cushions for those days that felt a little vulnerable. And, you know, it worked well enough. Except when you’re referring to an outline, a notebook, and probably some bits of scrap paper as well, and still need space for a cup of tea, a bottle of water, and some cookies. Plus you know the cat will make space for herself.

The little furry muse felt that there was, indeed, room for one cat on the rolly desk.

So, some three years after starting this whole writing thing, I bought a desk. A proper one, not a 30€ compromise just big enough to fit my laptop on. And I bought a desk chair – one that I can’t feel the screws in the base through the cushion, and in which I can tuck my legs up any way I want. And I installed it in the second bedroom, despite the fact that if we ever want to pull the spare bed out into a double, we’re going to have to dismantle the desk (we don’t really do visitors, anyway). I took the pictures down and put up plans and calenders and reminders, and filled the desk shelf with craft books and a pen jar and a dragon painting. It still looks uncomfortably clean and tidy, although the one drawer’s already nicely cluttered, there are post-its everywhere, and there’s cat hair stuck in the joins. I also need to find a better solution to music supply than an old phone with a cracked screen plugged into a pound store speaker, but it’s working for now. And then I went back to the kitchen counter.

The kitchen counter has its advantages.

Yeah, I know. All that, and I’m back at the counter? Well – it’s kind of serious, having an office, isn’t it? That kind of makes it real. Kind of grown-up. Like I have to actually focus, and not wander off to get a cuppa or a biscuit every few minutes, or to laugh at the cat. I told myself that I’d use the desk just for writing writing, not for making graphics or posting blogs or doing social media or anything else, and that seemed reasonable. Plus standing really is better for me. I should definitely stand as much as I can. Definitely.

It took me two, maybe three weeks before I used the desk in earnest. It made me strangely nervous, sitting down and pulling out the keyboard and telling myself that I was sitting here to write a short story, because that’s what the desk was for. Writing. But – but if I have a place in my home that I go to write and only write, then – well, then that’s like being a real writer. That’s – I’m not sure I’m ready for that.

But I sat down and did it. And, unlike being on the couch or at the kitchen counter, I didn’t wander off into the wilds of the internet every five minutes. I didn’t get up to grab a quick something (or not even have to get up, as at the counter. The cookie jar is right there.) I sat down and I wrote, and the only distraction was the Little Furry Muse coming to investigate what I was doing in her room, then walking off in disgust when she realised I’d commandeered it. Followed shortly thereafter by her deciding that if the desk was in her room, it was obviously hers…

So here’s a thing I learnt. No, we don’t need a special place to write. We can write wherever we are. All we need is a little time, and a way to put the words down. But – and this is only how it worked for me – having a place we go when we write transforms the sitting down from something commonplace into something that’s a ritual. A process. I go into the room, I sit myself down, and I’m telling myself, here we go. Now is your writing time. Switch off that part of your brain that’s thinking about dinner, or French lessons, or social media, or cleaning, or friends, and just write.

And what a lovely thing that is.

I think we have a winner.

How about you, lovely people? Do you have a special space for writing or reading or working at home? Do you think it helps to have one? Let me know below!